The Reverend Bud Green is claiming to be the culprit behind the Brooklyn Bridge white flag stunt. Here’s what you need to know about the unconventional man of the cloth. 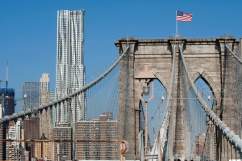 A Mysterious White Flag Is Flying From the Brooklyn Bridge

1. He Was a Producer for the ‘Jerry Springer Show’

Before Jerry Springer got his own national TV show, Springer hosted a daytime talk show in Cincinnati.
On one of his early episodes in 1992, he interviewed Reverend Bud Green, who described himself as a modern day Robin Hood. You can watch the clip above.

Green eventually went on to become a producer for The Jerry Springer Show when it went national.

Reverend Bud Green is a nom de plume, and he is obviously an advocate of marijuana.
He heads “The Pot Party’, whose platform, according to his website, is:

The Pot Party is about spreading the good news how the holy herb can save our lives and our country. Yes, Marijuana is the key to life and revolution. Good ole maryjane can save our country by reinvigorating our economy with herb and hemp based businesses like is starting in the great state of Colorado.

You can read more of his ramblings on his website.

3. The White Flag Was Intended to Promote the Pot Party

After claiming that he was behind the white flag on the Brooklyn Bridge yesterday, Green explained what its purpose was on his blog:

I can finally reveal that it was members of the New Pot Party that put up the bleached White Flags in NY that the whole country is talking about. The Flags symbolize the need for the new Pledge of No Allegiance that the Rev. Bud Green and the Pot Party revealed to the Public on the Fourth of July. On the night of July 22, brave members of the Pot Party and supporters of my candidacy for Prez in 2016 courageously climbed up and put up the new bleached flags. The original plan was then to replace the bleached flags with 2 new flags but the fascist police prevented us from doing it with their constant surveillance. The 2 new flags were gonna be the Pot Party flag which is a marijuana leaf with the revolutionary slogan Don’t Tread on Me to symbolize the beginning of a new American Revolution to be led by Pot Party Supporters.

However, according to NY Daily News, Green left the actual flag swapping to professionals:

Green said he came up with the idea of swapping out the American flags. The men who actually did the job were “professionals,” he insisted.

4. There Were Plans for More Flags

The plan was to follow up the white flags at a later date with two more flags, a large green marijuana leaf on a white background and the words “Don’t Tread on Me” and a second banner with a General Electric logo covered with a Nazi swastika with bombs and guns in the background. He said he picked GE because it owns NBC and he wants to draw attention to large corporations owning the media.

5. It Has Not Been Verified He Did It

Reverend Bud Green is only claiming responsibility. Police are still looking into his claims.

Loading more stories
wpDiscuz
7
0
Would love your thoughts, please comment.x
()
x
| Reply
Reverend Bud Green is claiming responsibility for the white flags on Brooklyn Bridge. He announced it was for marijuana reform & his presidential candidacy.