Robin van Persie is known to most as the best striker in the world and as a top goalscorer for the Netherlands. The striker may sensationally miss the Netherlands World Cup semifinal with Argentina due to a sickness in his stomach, reports Sky Sports. His coach Louis van Gaal called it an “intestinal problem” and said he wasn’t sure if RVP will play against Argentina.

Watch the video above to see some of van Persie’s best goals.

Van Persie signed a contract with Manchester United in 2012 after 8 years playing for Arsenal.

Arsenal traded van Persie for $30.5 million, plus a $2 million bonus for a Premier League Championship within the following four years.

2. He Scored 3 Goals in 2 Matches in the World Cup

Van Persie has been lighting up the field in this year’s World Cup with 2 goals against Spain in the opener followed by a game winning goal against Australia in the next match.

Despite his success, he received a yellow card in each game forcing him to sit on the bench during Holland’s 2-0 victory over Chile in the final Group B game.

After sitting out in the Round of 16 he scored the first penalty kick in the game against Costa Rica in the quarterfinals to help the Netherlands into the semifinals.

3. He Has A Bad Reputation

Van Persie was known as a “juvenile troublemaker” to most in his hometown of Rotterdam as a child, but was kept out of even more trouble than he would have been in due to his passion for soccer.

The talented Dutchman joined Holland’s biggest club Feyenoord at the age of 13 in order to pursue his dream, but he became his own worst enemy.

His performances on the field were far from lacking, but his blatant arrogance and selfishness shadowed his skill. When van Persie turned 20, Feyenoord got rid of him as soon as Arsenal gave them an offer.

His lack of likeability continued on to Arsenal as he accumulated unnecessary yellow and red cards in his first few years on the team, much to his coach Arsene Wenger’s dismay.

4. He Was Accused of Rape

For van Persie, 2005 shared both the lowest and highest points of his career. This was the first year he was chosen to be a part of the Netherlands national team, and the year he was accused of sexual assault.

Van Persie was thrown in prison for 2 weeks after being accused by and exotic dancer of rape. The chargers were dropped thereafter when the act was deemed consensual.

The rape incident happened a year after his marriage to Bouchra in 2004.

The situation almost cost him both his marriage and his career, but soccer’s bad boy finally decided enough is enough, straightening out his attitude towards his wife, teammates and coaches.

The couple has two children, their son Shaqueel and daughter Dina Layla. 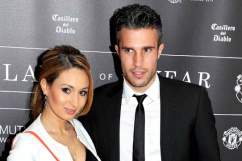 Loading more stories
wpDiscuz
0
0
Would love your thoughts, please comment.x
()
x
| Reply
Robin van Persie is known to most as the best striker in the world, but he might miss the World Cup semifinal due to an upset stomach.