A Texas man entered a home dressed as a FedEx delivery man and executed four children and two adults Wednesday before cops captured him after a three-hour standoff, cops said.

The suspect, 33-year-old Roy Lee Haskell, was on his way to the home of his estranged wife’s parents when officers closed in on him and eventually took him into custody, cops said. He’s charged with six counts of capital murder.

A 15-year-old girl was shot but survived after pretending she was dead, cops said.

1. Haskell Entered the Home Disguised As a FedEx Delivery Man

Cops say Haskell went to the home wearing a Fed-Ex uniform. Under the guise of being a delivery driver, he was able to enter the home.

According to ABC Houston, the surviving victim answered the door and the suspect asked if the girl’s parents were home. When she said they weren’t, he left. The man then returned a short time later, asking again for the girl’s parents. When they still weren’t home, she said she recognized the man as her “ex-uncle.” He forced his way into the house and tied up the children while waiting for other family members to return home, the station reported. The Houston Chronicle reports that the children’s parents were at the bank.

At some point, two boys, 4 and 14, two girls, 7 and 9, a 39-year-old man and a 33-year-old-woman, were all shot dead in the house, “execution style” with bullets to the back of their heads, the surviving victim told Click2Houston.

ABC Houston identified the adult victims as as Stephen and Katie Stay and the 15-year-old surviving victim as Cassidy Stay.

The Houston Chronicle reports that cops responded to the home after a 911 call at 6 p.m. local time. 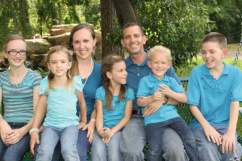 The Stay Family: The Photos You Need to See

2. Cops Had a 3-Hour Standoff With Haskell

After the shootings, police believe that Haskell was driving to the home of his estranged wife’s parents, where he was going to continue the spree. That’s according to the 15-year-old female survivor, who told police Haskell was going to kill her grandparents, reports CBS Houston.

While en route to the second house, Haskell was pursued by officers. Cops say he drove into a cul-de-sac, where after a three-hour standoff, he surrendered to cops. During the standoff, officers reported that Haskell pointed a revolver to his head, according to the Chronicle.

The suspect found himself cornered after cops used a spike strip to disable his car, prompting a standoff with around a dozen police cruisers and officers with weapons drawn. The three-hour siege ended when Haskell surrendered peacefully. At one point, two SWAT vehicles sandwiched the suspect’s car, preventing him from moving.

3. Cops Think Haskell Carried out the Killings Because of a Pending Divorce

Suspect believed to have gunned down 7 now cornered by authorities on Countrymeadows Dr. in Spring @KHOU #HouNews pic.twitter.com/L6z8kIl9Tk

Cops think a domestic dispute involving a divorce was Haskell’s motive. Haskell’s estranged wife is said to live out of state and was nowhere near the vicinity of the shooting. According to the Associated Press, Haskell has been separated from Melanie Kaye Haskell, the sister of Katie Stay since June 2013. The couple had been married for eleven years. The couple had four children together, Melanie Haskell was given primary custody of the children whose ages ranged from 3 to 11. The family lived together in the Utah town of Smithfield.

These children were all their [the suspect and his wife’s] children. It appears this stems from a domestic issue with a breakup in the family, from what our witness has told us.

Haskell was not present for his arraignment Thursday morning in Houston. He’s being held without bail.

4. The Surviving Victim Was Shot in the Head & Played Dead Until the Shooter Left

Cops say Cassidy Stay is in “very critical condition” at Memorial Hermann Hospital. ABC Houston reports the girl called the suspect her “ex-uncle.” The station added that her bullet wound fractured her skull and that she played dead until the shooter left.

5. Haskell Was Still Wearing a FedEx Uniform When He Was Booked

The suspect in Wednesday's mass shooting in Spring is identified as 34-year-old Ron Lee Haskell. pic.twitter.com/epAASPmyEj

The Associated Press reports that Haskell was an employee of FedEx up until January 2014. A company spokesperson Bonnie Kourvelas said in a statement:

Mr. Haskell formerly provided service for FedEx, but has not done so since January. Our heartfelt thoughts and condolences go out to all those involved in this tragic incident.

In February 2013, Stephen Stay said on his Facebook page that he had just started his own real estate business. In the status update he thanked his wife, Katie, for helping him set up the company social media profile.

Along with her daughter, Cassidey, Katie Stay were origami jewelry business sellers.

The Stay Family: The Photos You Need to See