Dutch defender Ron Vlaar has played a vital role in leading the Netherlands to the World Cup semifinals.

Vlaar injured his knee in Holland’s win over Costa Rica in the quarterfinals, but is back on the field as the team takes on Argentina.

1. His Club Team, Villa, Had a Rough Season

Netherlands’ centre-back, Ron Vlaar plays for the Aston Villa club team. Vlaar signed a 3-year contract for Villa and was named the team captain in the 2012-13 season. Unfortunately for Vlaar, the last two seasons have not been successful for Villa, Vital Football reported that the club finished in 15th place for two seasons straight.

It was really hard for us, the staff and for the fans. It needs to be better, one thing is for sure. The most important thing, though, is that we secured our Premier League status.

The whole Villa team is working toward recovering from their losing streak, led by Ron Vlaar.

In 2010, Vlaar married his high school girlfriend, Stephanie Bakker. The marriage lasted two years, and in that time the couple had two children. One of the children was born shortly after the two decided to get a divorce.

According to Fab Wags, once the two split, Vlaar began dating current girlfriend Yvonne Neefjes. Vlaar is very involved in the lives of his two boys, Shane and Xavi. Neefjes also has a son, Dex who she. The couple is often pictured with all of their children.

3. He Almost Had to Miss the Semifinals Because of an Injury

Vlaar has been a very strong defender for the Netherlands, preventing a number of goals. But in the quarterfinals against Costa Rica, he sustained a knee injury that jeopardized his status for the semifinal.

4. He Comes From an Athletic Family

Vlaar was raised in Holland with his parents and two younger sisters. Vlaar’s father was a soccer player as well, but he was nowhere near the level of his son, he remained an amateur player. According to Katagogi, Vlaar’s mother, Margaret, was a professional handball player.

His two younger sisters are also involved in athletics. Ellen Vlaar is a dedicated gymnast, while her sister, Lisan, is a volleyball player. Vlaar (Ron) began playing soccer at the age of 6, so clearly it was a part of his life influenced by his parents.

5. His Nickname is ‘Concrete Ron’

As a defender, Vlaar does whatever he can to prevent the opposite team from getting a shot at the goal. Metro reported that because of his strength as a center-back, Ron has been given the nickname “Concrete Ron” by fans and even teammates.

Concrete Ron is extremely talented when it comes to protecting his goal, and as the Netherlands’ prepare for their semi-final game this afternoon, there is fear that Vlaar will be out because of his injury. The Dutch defense would be much weaker without Vlaar. 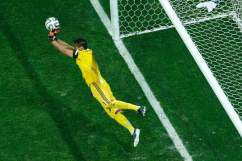 Loading more stories
wpDiscuz
0
0
Would love your thoughts, please comment.x
()
x
| Reply
Dutch defender Ron Vlaar has been impossible to pass in the 2014 World Cup, but a knee injury could have prohibit him from playing against Argentina today.