Ryan Gosling and Eva Mendes’ baby news sent a shock wave through Hollywood, and put the famously private couple in the spotlight.

As we celebrate the happy news, it’s time to look back at their relationship, which has been the envy of many for some time now.

As far as future wedding plans go, a friend of the couple told OK magazine, “Ryan doesn’t think they need to marry just because they are having a baby.”

1. They Met on ‘The Place Beyond the Pines’ Set

In the 2012 film, Gosling plays Luke, a motorcycle stunt performer who reconnects with his ex, Mendes, only to realize she gave birth to his son.

In September of 2011, they were first spotted as a couple, vacationing in Disneyland. They were photographed cuddling and holding hands, sparking relationship rumors.

The two became close on set, with a source telling People back then,

“They have great chemistry and seem to enjoy filming together. They seem to be good friends and always laugh together.”

When Marie Claire asked her about making the movie with Gosling, she tellingly replied:

He’s your dream co-star. I have never felt so creatively satisfied on a film. He’s amazing.

2. Their Baby News Broke the Internet

From co-stars to parents: a look back at Eva Mendes & Ryan Gosling's romance! http://t.co/wwnxy64prz pic.twitter.com/rZavHJYFro

On July 9, it was confirmed that Mendes was seven months pregnant.

The two kept the baby news a secret for so long, which is a rarity in Hollywood.
An insider told People magazine that Mendes, “just hasn’t ever wanted anyone beyond her close friends and family knowing more than they had to…And Ryan is certainly private and always has been.”

The Twittersphere was shocked at first, and then jealous and sad.

Congrats to @RyanGosling and @EvaMendes! That's going to be the most beautiful, bilingual, part-superhero, well-dressed, romantic baby ever.

3. They Both Came Out of Serious Relationships

Gosling has a thing for meeting his women on set.

He famously dated his The Notebook costar Rachel McAdams from 2005 to 2007, and then briefly again in 2008.

When they broke up, sources said it was because McAdams wasn’t ready to give Gosling the children he wanted.

Now with the news of Gosling unborn child, McAdams, according to OK magazine, is “devastated.”

ryan gosling & eva mendes are having a baby. pretty much how rachel mcadams &the rest of the female population feels: pic.twitter.com/YKRDdPSXg4

Mendes dated filmmaker George Augusto for over a decade. According to Radar, Augusto still works for his ex girlfriend as an assistant.

In 2011, when she was still with him, she told Hollywood Life that she wasn’t looking to get married:

It’s nothing negative when I say that [I don’t believe in marriage]. I just don’t think marriage is necessary, as necessary as society makes it. And I don’t have a negative point of view on it. I just think it’s a very old tradition and if you look back to what marriage symbolizes in the first place … it has nothing with why we get married today.

4. There Were Breakup Rumors

In February, various media outlets reported that their relationship was over.
In Touch and Life & Style were the first the break the news, and pretty soon every celebrity gossip page posted their breakup.

In the video above, Mendes dished to Ellen that her Valentine’s Day plans included watching The Notebook, which gave the message that the couple was still together.

5. They Made This Funny or Die Video

The couple’s sense of humor is apparent in this 2012 clip, titled Drunk History Christmas. 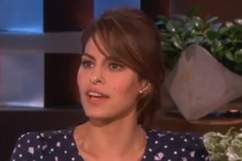 Loading more stories
wpDiscuz
0
0
Would love your thoughts, please comment.x
()
x
| Reply
Ryan Gosling and Eva Mendes are expecting a baby. Although the private couple has been dating since 2011, the news shocked Hollywood and made people jealous.