Sanel Saint Simon has been arrested by police in Orange County in connection with the disappearance of Alexandria Chery in Orlando, Florida, on July 28, reports WESH. Despite the arrest, Chery is still considered missing. Orange County Sheriff Jerry Dennings told the media:

We could be looking at homicide. That’s not what we’re saying at this time, but that’s the worst-case scenario.

Detective says they are looking for this black Pontiac @WFTV #WFTVat4 pic.twitter.com/tFIWAnNgmS

Saint Simon has been charged with providing false information to a law enforcement officer and attempted destruction of evidence. According to WESH, Chery’s mother saw that her daughter’s bedroom looked different on July 28, Chery’s bed was stripped and many of her daughter’s belongings were missing. Her mother also detected the smell of bleach in the room and splatter of blood around the apartment. The arrest affidavit states that Saint Simon told detectives he was at work when Cheryl was last seen.

3. Chery Was Last Seen in Bed

Chery was last seen by her mother on July 28. Chery was in her bed at the family’s apartment in Orlando, Florida. According to Click Orlando, cops have combing the area around the apartments since Monday. One neighbor, Shawnette Davis, told the station, “They just asked me had I seen anything or heard anything, but I work a lot so I didn’t. I didn’t notice anything and my daughters didn’t notice anything.”

4. Saint Simon Works as a Janitor

Saint Simon is a native of Winter Park, Florida. He has a janitorial business in the area.

Anybody with any information on Chery is asked to call the Orange County Sheriff’s Office on 407-836-HELP. 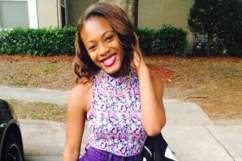