Sergio Romero, seen in the highlight reel above, proved to be one of Argentina’s biggest assets during its match against Iran in the 2014 World Cup. After helping team Argentina defeat Switzerland in their Round of 16 match on July 1 and Belgium during their quarter-finals match on July 5, Argentina will face the Netherlands on July 9 in the semi-finals.

Here’s what you need to know about Romero:

Romero played in all five of Argentina’s 2010 World Cup games, as well as the qualifier game against Uruguay that earned Argentina a spot in South Africa. He also represented Argentina at the 2008 Olympic Games, replacing injured goalkeeper Oscar Ustari. Argentina won the gold medal in men’s soccer at the games in Beijing.

2. He Plays for Sampdoria But Is on Loan to AS Monaco

Romero’s current club is U.C. Sampdoria in Italy, although he’s been out on loan to AS Monaco FC since 2013. He joined Sampdoria in 2011. Before then, he played for the Dutch club AZ Alkmaar from 2007 to 2011. He went pro at age 19 and signed with Racing Club de Avellaneda in Buenos Aires. He has represented Argentina internationally since 2007.

3. He’s Making a Name for Himself on a Team With One of the World’s Greatest Players

It’s hard for anyone to stand out when playing with a man writers have called the greatest soccer player in the world, but Romero has earned praise for his performance in Brazil along with standout teammate Lionel Messi. Diego Simeone praised the dynamic between Romero and Messi, saying:

I was also very happy with the performance of Sergio Romero against Iran. In a World Cup, when you have a player like Messi who can win you any game, plus a goalkeeper who is growing with each match, that’s very important. At a tournament like this one, if your goalkeeper is on form and your most decisive player is also on form, that gives you confidence at both ends of the pitch. It’s a weapon all teams would like to have.

Argentine coach Alejandro Sabella also sang Romero’s praises, in spite of a recent slump in club performances. Sabella said of Romero back in March, “Romero had a good match and I consider him an excellent goalkeeper who unfortunately is not getting continuity at his club. Apart from the odd injury he has always been in my team … the position (at the World Cup) is his.”

4. His Nickname Is ‘Chiquito’ Because His Brothers Are Giants

Even though Romero is 6-foot-3, his family dubbed him “chiquito,” or tiny, in comparison with his basketball-playing brothers. His tallest brother, Diego, stands 6-foot-10. Diego is a professional basketball player in Argentina and played for Florida State University when he was in college.

Romero married model Eliana Guercio in 2008. The couple had a daughter, Yazmin, in 2010. 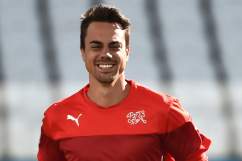 Loading more stories
wpDiscuz
0
0
Would love your thoughts, please comment.x
()
x
| Reply
Sergio Romero will be defending the goal as Argentina takes on the Netherlands in the World Cup semi-finals on July 9.