In a sad twist of events, Sierra Leone’s chief ebola doctor Sheik Umar Khan has contracted and died from the virus himself.

Khan is credited with personally treating more than 100 ebola victims, with 206 dying of the disease in Sierra Leone alone. The disease has killed 632 people since an outbreak of the disease began in Guinea in February.

Sierra Leonean journalist Umaru Fofana, who interviewed Khan for Reuters last month, tweeted Tuesday that Khan had died from the disease, according to Sierra Leone’s Chief Medical Officer, Dr. Brima Kargbo. News of Khan’s diagnosis broke less than one week ago on July 23.

2. He Feared he Would Contract the Virus

In an interview with Reuters, Khan said he was afraid for his life because of the kind of work he was doing. He said, “I am afraid for my life, I must say, because I cherish my life. Health workers are prone to the disease because we are the first port of call for somebody who is sickened by disease. Even with the full protective clothing you put on, you are at risk.” When he gave the interview, he showed no visible signs of illness.

3. The Disease Is Transmitted Through Bodily Fluids

The ebola virus is transmitted through contact with bodily fluids, including sweat and saliva. As the disease progresses, ebola patients experience fever, rash, vomiting and diarrhea. According to the World Health Organization, the time period from initial infection to the onset of symptoms is 2 to 21 days.

4. Health Workers Are at High Risk for Infection

Because of the highly infectious nature of the disease, health workers are at high risk for contracting ebola. Khan told Reuters he called a mirror in his office his “policeman” because he would check it meticulously to make sure he didn’t have any punctures or holes in his protective clothing before entering an isolation ward.

5. Health Workers Are Battling Psychological Issues Because of Their Work

In a piece for The Guardian, Ane Bjøru Fjeldsæter, a psychologist with Médecins Sans Frontières, or Doctors Without Borders, wrote of the mental toll working in isolation units has on health workers. She writes:

They (the hygienists) are the ones who mop up the vomit, the stools and the blood. And when there’s a death, they are the ones who retrieve the body from the isolation ward, put it in the morgue and disinfect it. In the final stages of the disease, the viral load increases massively, which means the dead bodies are extremely contagious and very dangerous to deal with.

Dealing with the dead bodies is disturbing: the hygienists experience feelings of sadness and fear, but also disgust. When Ebola patients die, there’s bleeding, vomiting and diarrhoea. The cleaners tell me they have flashbacks of the things they have seen and of things they have smelled. Even wearing a mask, you can’t shut out all the smells. 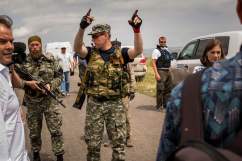 Loading more stories
wpDiscuz
2
0
Would love your thoughts, please comment.x
()
x
| Reply
Sierra Leone's chief Ebola doctor, Sheik Umar Khan, has contracted the deadly virus after personally treating more than 100 patients with the virus. The disease has no cure and has killed more than 90 percent of people infected.