A passenger airplane flying from Toronto to Panama City was diverted 45 minutes into the flight and escorted by American fighter jets back to Toronto after a bomb threat was made on board.

The flight was Sunwing flight 772 and raw footage taken by passengers shows a SWAT team boarding the plane to arrest the unruly passenger.

1. An Unruly Passenger Made Bomb Threats

Around 45 minutes into the flight, as the plane is estimated to be over West Virginia, an unruly passenger reportedly made threats against the aircraft that, according to the CBC, “concerned the security of the plane.”

2. The Plane Was Escorted Back By 2 American F16s

The CBC reports that two F16 fighter jets were scrambled from Toledo, Ohio, and escorted the passenger plane back to Toronto.

3. The Passenger Was Arrested

The passenger, whose name has not been released to the press, was arrested by armed police when the plane arrived back in Toronto. The video above, shot by a passenger on the plane, shows heavily armed officers in body armor shouting forcefully for passengers to put their hands up and their heads down.

The plane was carrying 183 passengers, including 2 infants, and a crew of 6 people. The plane left Toronto at 7 a.m. and was expected to land in Panama City Friday afternoon.

None of the 116 people aboard Air Algerie flight 5017 survived when the plane went down in the Sahara desert during a flight from Burkina Faso to Algeria. 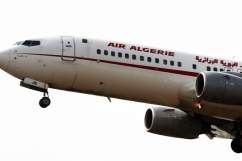 Loading more stories
wpDiscuz
1
0
Would love your thoughts, please comment.x
()
x
| Reply
Sunwing Flight 772 from Toronto to Panama City was escorted by F 16s back to Toronto after bomb threats were made by an unruly passenger.