Tony Degrafreed has been charged with beating and stabbing his wife Rebecca to death at their home in Indianapolis on July 20, reports WISH TV. This all comes just under 20 years since Degrafreed was charged and convicted of killing his then-wife Stacey during a domestic dispute that turned into a shooting.

1. In 1995, Degrafreed Was Convicted of Murdering His First Wife

In January 1994, Degrafreed opened fire during a domestic dispute with his then-wife, Stacey, and two other people. Stacey Degrafreed died in that shooting. In March 1995, Degrafreed was convicted of her murder and sentenced to 30 years in prison. He was released in 2006 with Indiana Department of Corrections insisting that he wasn’t released early.

We found these broken/bloody scissors next to accused killer, Tony Degrafreed Sunday as he was in custody. @FOX59 pic.twitter.com/RYujcspYdA

On the morning of July 20, Jordan Yarbro, the son of Rebecca Degrafreed from a previous relationship, heard loud noises coming from his mom’s bedroom. When he asked if everything was okay, Tony Degrafreed replied it was. A few moments later, Degrafreed rushed out the tour, tried to stab Yabro in the chest, and fled. After calling 911, Tony Degrafreed was arrested a short distance from the home. Inside the bedroom, Jordan Yarbro found his mother dead on the floor, having been beaten with a baseball bat and stabbed with a scissors.

JUST IN: Police say Tony Degrafreed is preliminarily charged with the AM murder of his wife Becky. Married since 06. pic.twitter.com/GjYVrKTBGA

According to Rebecca’s other son, Jeffrey, shortly after Tony Degrafreed got out of prison, he came to live in their house. Jeffrey Yarbro says his mother helped get the ex-con back on his feet, even helping him get a job. The first met when they were 15 years old, they were high school sweethearts, and stayed close even after Degrafreed was sent to prison, reports The Indianapolis Star.

4. Degrafreed Was Released Early in Part Due to Gaining His GED in Prison

WTHR reports that Degrafreed was released in under 30 years due to good behavior, also six months for time served, another six shaved off for earning his GED well he was inside, later he received an associates degree. He was released under parole for two years in 2006. In 2012, he was convicted of marijuana possession but received a 363 day suspended sentence.

5. Rebecca Degrafreed Was Described by Her Son as an Excellent Motivator

Rebecca Degrafreed was a sales rep, Jeffrey, described as an excellent motivator. He said:

According to her Facebook page, Rebecca Degrafreed worked for Avon in sales and was a graduate of Ivy Tech Community College and Martin Center.

Her daughter, Tiffiney, left a heartbreaking message on Facebook: 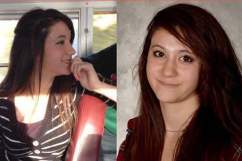 Read More
5 Fast Facts, Breaking News, Crime, Murder
Follow Heavy ↓
Tony Degrafreed is being charged with the murder of his wife, Rebecca Degafreed, in Indianapolis. This comes 20 years after he was first convicted of murdering his first-wife, Stacey.