We’ve compiled a list of the top 10 NFL quarterbacks for the upcoming season based on an average of rankings from the top Fantasy Football writers in the business.

The rankings averaged are a combination of ESPN, Yahoo Sports, CBS Sports, Fox Sports and NFL.com‘s to create the most accurate list of QBs you want on your Fantasy team.

Here’s what you need to know about the quarterbacks:

Peyton Manning is hands down the best quarterback in the league. In the 2013 season for both the NFL and fantasy leagues, Manning totaled the highest stats of any quarterback. Despite losing Eric Decker, one of the top wide receivers for the Broncos last year, to free agency, Manning still has a few teammates he can count on this season.

The Broncos receivers Wes Welker and Demaryius Thomas are still there for him along with Emmanuel Sanders who recently joined the team from the Pittsburgh Steelers. Julius Thomas, a key tight end on the team is another important asset for Manning and the team.

Don’t expect him to repeat last year’s record-breaking season, especially since he is 38 and has four matchups against the tough NFC West. But even if Manning takes a step back, he has a very good shot at defending his fantasy points title.

Right behind Manning is Drew Brees with over 5,000 yards and 39 touchdowns completed in the 2013 season. It is hard to compete with Manning’s 2013 standout season which was arguably the best of his already impressive career, but Brees still managed to score over 30 points in 5 fantasy games last season which matches up with Manning’s.

Along with staying on Manning’s tail, Brees happens to have a pretty easy schedule with just five games versus teams who finished in the top third of the league.

We all know that Brees can light up the stat sheet, and with the addition of the electric Brandon Cooks those numbers are only going to improve.

Although Rodgers only finished with 162 points in the 2013 Fantasy season, you have to consider that he was averaging 18 points per fantasy game with a broken collarbone injury which was the 4th highest in the league.

Rodgers can also count on Packers running back Eddie Lacy who is ranked top this year for Fantasy football mock draft picks.

Rodgers pairs elite accuracy with superb rushing skill (18 ground scores since 2008, most among QBs not named Cam Newton) and an unparalleled ability to create plays on the move.

RG3 had over 19 points in 6 games in the fantasy league last season prior to having eight 19-point games his rookie season with the Redskins.

His only downfalls are his low percentage of passes thrown down field over 10 yards which he ranked second to last for in 2013. Although he had a severe knee injury in January of 2013, he has since recovered in an extraordinarily fast amount of time and should be good to go.

The pros to having RG3 as your quarterback is that he is supported by Redskins wide receiver DeSean Jackson who totaled 1,332 yards last season. Behind Jackson are Aldrick Robinson, Andre Roberts and Pierre Garcon who will help RG3 rack up big points.

The Redskins should be a fun team to watch this season with several quality Fantasy options. The key is Robert Griffin III, and I’m expecting him to rebound in a big way.

We like Griffin as a Top 10 Fantasy quarterback coming into the year. He’s worth drafting with a mid-round pick, and he could provide big rewards, especially if he’s comfortable running again. We’re excited for his outlook in 2014.

He should return to his rookie production level.

Stafford is a top prospect for the fantasy draft thanks to his passing skills. He threw more passes in his 3 years as an NFL quarterback than any QB in the history of the league in that amount of time. Not only does he have the arm, but his passes are falling into the trustworthy hands of Calvin Johnson who had 1,492 yards and 12 touchdowns last season and Detroit newby Golden Tate who had the top stats for vertical reception with an average of 31 yards with the 2013 Superbowl Champions, the Seattle Seahawks.

The only discretion is that the Detroit Lions have a new head coach, Jim Caldwell, who’s passing methodology will most likely involve less passing than Jim Schwartz‘s did. This could affect Stafford’s game since it depends so heavily on passing.

I think first of all, Stafford is able to throw the ball from different body angles unlike most quarterbacks. He’s comfortable doing it. He did it at Georgia. I’m sure he did it in high school when he was in Texas. It’s not conventional all the time.

With a fourth place finish in regards to points among fantasy quarterbacks last year, Luck has a promising season ahead of him. In 2013 he lost Reggie Wayne for 9 games that could have been a setback, but he still managed to come up big.

This season, Luck is gaining Hakeem Nicks, Da’Rick Rogers and T.Y. Hilton who is expected to do big things. Tight ends Coby Fleener and Dwayne Allen will be clutch for both Luck and the Colts to create some deadly combinations.

Like the Saints, the Colts’ schedule is not the most challenging with three of their games scheduled to play teams in the bottom five teams last year.

I’ve compared Luck to Steve Young for his ability to make plays out of the pocket, and he has a preternatural ability to create structure on the fly when things break down.

The Carolina Panthers’ Cam Newton racked up unbelievable numbers last year despite having little to work with. He had the highest number of points for rushing plays last season of QBs in the league. That leads us to believe that although Carolina lost four of their best wide receivers, Newton will still be okay.

The draft this year gave Newton Kelvin Benjamin that could help him out this year. However, Newton recently recovered from injuries to his ankle although it shouldn’t hold him back considering he still managed to gain the stats he did last year with the same setback.

Offseason surgery should lead to a fully healthy set of wheels, and that could move Newton into triple-digit territory for fantasy rushing points, which is an achievement worthy of a Superman pose — or three.

Brady is not ranked as high as you’d think because of his dependency on Rob Gronkowski. Brady had a slow start last year while Gronk was out with a tough ACL injury and did a 180 when Gronk returned, scoring 60 percent more points in fantasy than when Gronk was out with over 18 ppg versus his 11 in the beginning.

Therefore Brady could go both ways depending on the health of Gronk. He also has Michael Hoomanawanui at tight end to help him out, but his strength lies with Gronk’s health.

But no one benefits more [from Gronkowski] than the man throwing him the football. From 2010-12, 33.5 percent of Brady’s completions and 34.9 percent of his passing yards went to tight ends as Gronkowski and Aaron Hernandez formed one of the best tight end duos the game had to offer.

With Gronkowski on the field, the Patriots offense, even with their relative lack of depth at wide receiver, is still among the best in the NFL. Without Gronk it’s just a slightly above-average offense, mainly because Tom Brady is throwing the passes.

Nick Foles came in clutch for the Philadelphia Eagles last season when Michael Vick was taken out for a hamstring injury. He had the most points from week 9-17 last year in the fantasy league, topping Peyton by .7 in his ppg average of 24.6.

Foles shows no sign of slowing down this year with support from Jeremy Maclin despite the loss of DeSean Jackson to the Redskins.

He’s shown a great understanding of coach Chip Kelly’s offense, which helped him throw for 27 touchdowns and a mere two interceptions in 2013. I’m not ready to put him on the elite level of quarterbacks with the likes of Peyton Manning and Drew Brees, and it’s obvious that an increase in turnovers is imminent.

However, Foles should also see rises in passing yards and passing touchdowns in 2014. Fantasy owners should also keep in mind that he’s not afraid to tuck the football and run with it, as he recorded 221 yards and three touchdowns on the ground.

Colin Kaepernick ranked 4th in the league for rushing yards with 524 total for NFL quarterbacks despite a slow start last year. He finished 11th overall in the rankings for fantasy football quarterbacks in his first year and has huge potential for this year with Michael Crabtree , the top receiver for the San Francisco 49ers out there to catch his passes.

The surprise, though, was some of his passing metrics. Kaepernick is among the few quarterbacks who produce big on downfield passes (38 fantasy points on stretch vertical throws, ranked ninth) while still expertly protecting the ball (1.6 percent bad-decision rate). 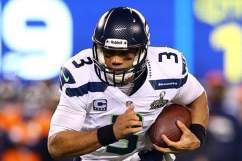 Loading more stories
wpDiscuz
0
0
Would love your thoughts, please comment.x
()
x
| Reply
We compiled a list of the top 10 NFL quarterbacks for the upcoming season based on an average of rankings from the top Fantasy Football writers in the business.