We’ve compiled a list of the top 10 NFL tight ends for the upcoming season based on an average of rankings from the top Fantasy Football writers in the business.

The rankings averaged are a combination of ESPN, Yahoo Sports , CBS Sports , Fox Sports , NFL.com‘s to create the most accurate list of WRs you want on your Fantasy team.

Here’s what you need to know about the tight ends:

Graham took the first place spot with ease as he dominated the tight end position last season with 16 TD receptions to mark him as the second most ever by a tight end in the NFL. He is a player that worked his way up from nothing to the best at what he does. Watch the video above to see his tough path to the NFL and what he has done since.

He totaled over 1,200 yards with an average of 14.1 yards per catch, the best of his career, despite being held back towards the end of the season by a plantar fascia injury. However, even after he was injured in Week 9, he still scored 6 TDs. Injured or not he is the most solid pick you could have for a tight end.

According to Yahoo Sports via the Sports Xchange:

He posted the fastest time in the team’s grueling CrossFit conditioning test on Thursday and then wowed onlookers Friday morning in his first practice since last season.

The 2013 season was Thomas’ second season and first season actually getting playing time. He is the most clutch player you could have in the red zone with 8 of his 12 TDs coming from within the opposing team’s 20 yard line.

Not only is he talented, but he is surrounded by a foundation that allows him to show that. He is playing alongside Emmanuel Sanders and Wes Welker who will make sure he gets singled up looks on the reg and the best quarterback in football, Peyton Manning will be throwing the ball to him consistently. His potential for racking up huge fantasy points is off the charts. As a key part of the Broncos’ offense and very little tendency for injury, Thomas is a great investment.

He’s going to be a very special player. It was fun to watch him grow up last season. In this offseason, he really impressed me with his attitude and work ethic and how hungry he was.”

A desire for greatness led Thomas to look up Tony Gonzalez this offseason. Thomas is resourceful that way. During the 2011 lockout, he was the only Broncos rookie to figure out how to attend the team’s player-supervised workouts with trainer Loren Landow at Valor Christian High School.

Despite the fact that Gronk has had 8 surgeries in his career, including his recent ACL and MCL surgery of which was very serious, he is still good enough to make the top 3. In 50 regular season games, Gronk has managed to scored 42 TDs.

So, the question is can he keep getting hit by guys like T.J. Ward and manage to stay out of the hospital for long enough to score the fantasy points he is capable of. Taking Gronk is extremely risky, but could have a huge payoff in the end.

The Patriots would love to see Gronkowski stay healthy for 16 games and play the way he played the last time he was healthy for 16 games: In 2011, when he was healthy all year, he caught 90 passes for 1,327 yards and 17 touchdowns. If the Patriots can’t get that kind of production out of Gronkowski, their lack of depth at tight end will be a problem.

Vernon Davis went from ranked 15th in the 2012 Fantasy League to 2nd in last year’s after averaging 16.2 yards on yards per catch and 13 TDs. Much to everyone’s surprise, Kaepernick and Davis ended up being a deadly duo. For 9 of the 13 TDs, Kaepernick depended on Davis in the red zone to get him touchdowns.

The only reservations on Davis are his teammates Stevie Johnson and Michael Crabtree who could pose as a threat to his yardage and reception numbers by being given the ball frequently on an offense that depends regularly on running plays. However, with TD stats in two figures, Davis is sure to put a ton of points on the board.

Vernon’s still probably the best at his position and still plays at a high level. He’s 30, but he still can run like he’s 23, 24.”

San Jose Mercury News said of an interview with Kaepernick:

Kaepernick doesn’t expect “too much of a fall off” for Davis after missing offseason work. But the arrival of the 49ers’ starting tight end — and arguably best deep threat — allowed for the Day 1 optimism that should accompany any Super Bowl contender.

Cameron was neck-and-neck with Vernon Davis for second place through Week 8 of the season until the defenses started closing in on him. Before that point he had 49 receptions, 6 TDs and was trailing Graham in the No. 1 spot by just 34 yards. Once everyone realized how big of a threat he is, he finished with just 31 yards and 1 TD.

With Rob Chudzinski leaving to coach the Colts, it holds a question of how dependent the offense will continue to be on the tight end position. Either way, Cameron will be a tough contender as long as the defense isn’t completely stacked against him.

Browns tight end Jordan Cameron was “impossible to cover” in OTAs and minicamp. The 6-5, 249-pounder can line up anywhere and has shown better footwork and explosion compared to last year, when he caught 80 balls for 917 yards and seven touchdowns.

Witten is a veteran of the tight end position. In the 2013 season, he scored over 5 touchdowns for the second time in the last 6 years in the NFL to finally match up his skill and yards totaled to his points in the end zone. However, his yardage percentage along with his drop in catches are a bit concerning.

Despite his many years in the NFL, he is healthy and ready to go with no reason to not improve further this year. The question is will he break out of the funk or continue to decline.

Now entering his 13th season with the team, Witten has done everything asked of him and more, on and off the field.

Witten’s 879 receptions are the most in Cowboys history and second all-time in NFL history for tight ends, trailing only Tony Gonzales’ 1,325.

If Dennis Pitta is healthy, he will be scoring you big points. If his hip which he fractured and dislocated last year during training camp continues to bother him despite being cleared last December, there will be huge problems for both fantasy owners and Baltimore whom rely so heavily on him for the passing part of their game.

Baltimore will do just about anything to keep him healthy and playing and if he does so, Flacco will be throwing him the ball every chance he gets. We know this because the Ravens gave him $16 million for this winter. With Gary Kubiak as the offensive coordinator this year and his preference for having tight ends move the ball, Pitta will undoubtedly have the most catches for the team in front of Steve Smith, Torrey Smith and Owen Daniels who will handle the stuff in other areas.

Aaron Wilson of the Baltimore Sun said after interviews with coaches:

Signed to a five-year, $32 million contract in March, the tight end is expected to have a versatile role in new offensive coordinator Gary Kubiak’s offensive system. That includes everything from Pitta being split out as an extra wide receiver to working out of the backfield as well as traditional in-line tight end alignments.

Kubiak runs a tight end-friendly offense where he’s routinely utilized two or even three tight ends in multiple roles on any given play.

If you’re looking for consistency, Olsen is your guy. In his past two seasons playing for the Panthers, he had about 70 receptions, 5 TDs and totaled 800 yards. With an athletic stature solid as a tree trunk, he is a good choice for a pick and will get fantasy owners a substantial amount of points.

He isn’t expected to be as big a contributor as those on the top of the list, but he is definitely solid.

The ever-durable Greg Olsen is slated to be Carolina’s starting tight end for a fourth-straight season in 2014. The 29-year-old has played in all 16 regular season games for six consecutive years, dating back to his time in Chicago, and should again be one of Cam Newton’s primary targets.

Picking Jordan Reed is all about his potential. Since he was just a rookie last year, it is hard to say where he will get to this year, but based on his growth from September to the end of the season, he is a risk most would want to take.

After a slow start in September, Reed suddenly became the Redskins’ go-to guy, bringing him to 4th most receptions ever in a game by a TE with 14 receptions in the 8th week. His season came to a screeching halt when he suffered a concussion in the middle of November. He has since recovered and Jay Gruden, who relies heavily on a downfield looking offense, has been put in as head coach. Reed is expected to be receiving many of the passes thrown down there, however his number of receptions will be fighting against those of Pierre Garcon, Andre Roberts and now DeSean Jackson.

He’s going be a key player in our offense. He’s an elite route runner for the position, and he still competes with the toughness. He’s got great feet, so he can cover guys up in the run game.”

There is no doubt that Kyle Rudolph is a skilled player. That said, last year he did not live up to his fantasy points potential and his play was stunted further when he broke his foot in Week 9.

In the 2012 season, he scored 9 touchdowns for the Vikings and followed is up last year with just 3. He also only managed to have more than five catches in a single game last season. In past years, he has not been given the ball very often which hasn’t helped the situation.

However there is reason to still count him in despite the facts listed above. This year, Rudolph’s skill will be taken advantage of much more now that Norv Turner is the Vikings’ offensive coordinator. In the past, Turner has turned tight ends like Jordan Cameron and Antonio Gates’ career into success stories, developing them into breakthrough players and bringing them to their fullest potentials. This so called “Norv Turner Effect” is the reason why it could be worth risking it for Rudolph.

In six of the last seven seasons, Turner’s primary tight end has finished as a top-seven Fantasy TE.

Now it’s Kyle Rudolph’s turn. He’s 24 and, like Gates and Cameron, comes from a basketball background. The 6-6, 259-pounder had hoops scholarship offers to schools like Wake Forest, but chose to play football at Notre Dame.

“…The arrival of tight end developer Norv Turner to run the offense should put Rudolph in prime position to finally break out.”

To see the full list of tight end rankings from the cited sources, click the links below: 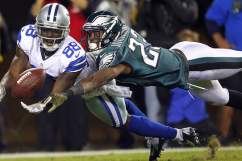 Loading more stories
wpDiscuz
0
0
Would love your thoughts, please comment.x
()
x
| Reply
We've compiled a list of the top 10 NFL tight ends for the upcoming season based on an average of rankings from the top Fantasy Football writers.