NBC News’s Brian Williams got to report on some good news last night. His daughter, Allison Williams, a co-star of HBO’s “Girls,” will be playing the title role in NBC’s 2014 musical version of Peter Pan. In the report, the proud father and news anchor tells the world that, “family members confirm that she’s been rehearsing for the role since the age of 3.” He followed by posting this adorable photo of a young Allison Williams:

NBC’s last musical endeavor, “The Sound of Music Live!,” was watched by over 18 million people. 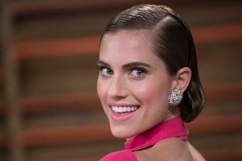