A new video of alleged Boston Bomber Dzhokhar Tsarnaev shows him at the gym joking with friends just one day after the bombing at the 2013 Boston Marathon.

The Boston Globe reported that the video was one of three videos submitted into evidence in the trial of Azamat Tazhayakov, a friend of Tsarnaev’s accused of hiding evidence after he suspected his pal may have been the wanted bomber.

According to Boston.com, the video shows Tsarnaev and Tazhayakov entering the gym at the University of Massachusetts Dartmouth campus one day after the explosions that killed three and wounded hundreds more.

Closing arguments in Tazhayakov’s trial are scheduled for Wednesday, July 16, and Tsarnaev’s trial remains scheduled to begin on November 3, 2014. 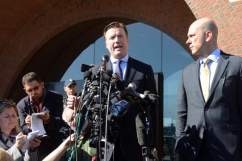 Friends Of Dzhokhar Tsarnaev Indicted on Obstruction of Justice Charges