Yoenis Cespedes is the defending champion of the back-to-back Home Run Derbies as a member of the American League team. The Oakland Athletics slugger is one of the best Cuban players the league has seen in years.

Yoenis Cespedes of the Oakland Athletics hit 17 homeruns in Round 1, 6 in Round 2, and 9 in round 3 to win the 2013 Home Run Derby at Citi Field last year. Watch the video above to see highlights of his home runs.

He won 9-1 in the final round against Todd Frazier to mark the second winner in history to win back-to-back Home Run Derby next to Ken Griffey Jr.

Cespedes totaled 30 home runs in this year’s derby. Two of the hits were fur to a tiebreaker round since he started out the contest slow. He quickly gained momentum and went on to hit 17 homers in the next two rounds to make it to the final where he hit 10 more.

5 of the 6 longest home runs were Cespedes’.

3. His Mother was an Olympic Softball Player for Cuba

Estela Milanés, Cespedes’ mother was a member of the 2000 Olympic Softball team for Cuba. His father Cresencio Céspedes was also a professional baller and played catcher. Cespedes’ parents were divorced when he turned one.

4. He Was a Member of the Cuban National Series Until 2011

Céspedes left Cuba the summer he dropped from the league to go to the Dominican Republic. He and ten of his family members settled down there by 2012.

“arguably the best all-around player to come out of Cuba in a generation.”

The vine above shows one of his greatest plays from the outfield with an amazing throw to get someone out at home.

He was picked up by the Major Leagues thereafter and signed a 4-year, $36 million deal with the Oakland Athletics on February 13, 2012, where he remains today.

5. His Family Almost Died Traveling from Cuba to the U.S.

After Cespedes moved to the U.S. with his contract, many of his family members from Cuba wanted to follow. Their trip went terribly wrong when their boat was stranded on a tiny island without food or water for two days. There were 10 people, one of which was a baby left 600 miles south of the coast of Florida and after days of dehydration and constant sun exposure, the family prayed before they thought they were going to die.

They ended up eating seagulls and iguana for food until a yacht found them. It took two more years before they were united with Cespedes in the states after jumping to four different countries, being put in jail twice for immigration laws and trafficking and 6 boat rides. 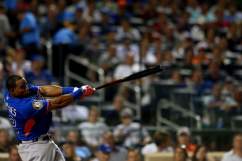