The first game of Auburn’s SEC title defense wasn’t quite as wild as some of the miraculous wins that characterized the Tigers’ storybook 2013 season. But it sure was interesting.

With Nick Marshall coming off the bench as punishment for a marijuana citation, the Tigers stumbled through the first half against an inferior Arkansas team and found themselves tied with the Razorbacks at the half.

Then came an an outpouring of Auburn offense. Then a lightning delay that lasted more than an hour. Then finally, more Auburn offense to cap things off and send the Tigers home with a 45-21 season-opening win.

Click here for the full box score and read on for a roundup of highlights:

Jeremy Johnson, who started in place of Marshall, got the Tigers on the board when he dumped the ball off to Melvin Ray, who took it 49 yards to the house down the left sideline with 9:37 left in the first quarter.

But Ray wasn’t the only guy showing off his speed on the play. Watch the vine of the touchdown and check out the wheels on Auburn’s ball boy, who nearly out-runs Ray.

Johnson’s 18-yard touchdown pass to D’haquille Williams put Auburn on top 21-7 with 13:20 left in the first half. But the resilient Hogs scored two unanswered touchdowns to pull even at the half.

Jermaine Whitehead intercepted a pass from Allen and took it 33 yards to the house for a touchdown that gave the Tigers some breathing room and made it 35-21 with 2:39 left in the quarter.

The Game Was Halted Because of Lightning

Tigers came back out on field at Jordan-Hare and it is pouring here in #Auburn. Crowd roaring. #WarEagle pic.twitter.com/uR7NdPOE4R

The game was halted because of lightning with 9:55 left in the game. The skies opened up shortly after the teams left the field, but at about 7:10 p.m. local time, the teams came back on to the field amid pouring rain and a mostly empty Jordan-Hare Stadium.

The game resumed about 10 minutes later after a delay that lasted more than an hour.

Corey Grant Stuck in the Dagger

If there was a shred of doubt about the outcome, Corey Grant removed it when he scored on a 3-yard touchdown run with 3:15 left in the game, delighting the diehards still left at Jordan-Hare and making it 24 unanswered points for the Tigers.

What looked at the half like an unexpectedly close game turned into a runaway Auburn win. 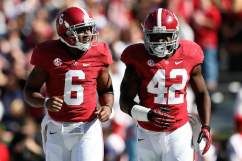 Read More
College Football, Football
Arkansas gave defending SEC champion Auburn all it could handle in the first half Saturday. Then the Tigers scored 17 unanswered points before a lightning delay halted play.