As Alabama begins its season with hopes of becoming the inaugural winner of the College Football Playoff National Championship, quarterbacks Jacob Coker and Blake Sims are both slated to take snaps in their season opener. But Sims will get the start under center Saturday against West Virginia.

Will the Crimson Tide find a viable replacement for AJ McCarron in Sims?

Here’s what you should know about Alabama’s fifth-year senior now in his third position at Alabama:

1. Rapper TI Promoted Sims While in High School & Said He Could ‘Run a 4.39 With a Wet Sweatshirt On’

Blake Sims was the topic of conversation on TI’s tour bus between TI and his friends during Sims’ senior year in high school. Watch the video above to hear TI rave about Sims. 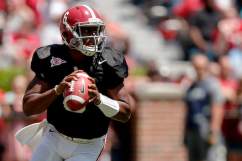 Blake Sims Photos: The Pictures You Need to See

2. He’s Gained More Yardage for Alabama as a Running Back Than as a Quarterback

But while he’s made only 23 completions under center for the Crimson Tide, coach Nick Saban is confident with Sims’ arm. Last October, Sims came off the bench and completed 14 of 18 passes and a touchdown against Georgia State, comfortably progressing through reads and targeting receivers. 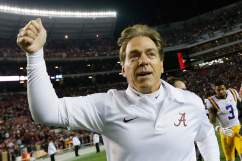 Believe it. January 8, 2010 — the day after Alabama’s 37-21 rout of a previously unbeaten Texas team in the BCS National Championship. Blake Sims, then a 4-star recruit out of Gainesville, Georgia, called Saban and decommitted. Speaking to a reporter that evening, he said Alabama’s offense “felt like it didn’t fit me.” Lane Kiffin — then head coach of SEC rival Tennessee and now Alabama’s offensive coordinator — was reported to have been largely responsible for instilling doubt in Sims.

Now more than four years later, the freshman decommit is at the helm of one of the most prolific squads in college football’s 145-year history, hoping to prove to Saban and the Tide fans that he deserves the starting job over Coker, a dynamic Florida State transfer.

4. He Was a Dual-Threat Quarterback in High School & Was Heavily Recruited by Several Elite Programs

As you’d expect with a quarterback totaling 49 touchdowns and 3,736 all-purpose yards his senior season, Sims was heavily recruited by several college powerhouses. (Check out the video above for a highlight reel.)

His 2,288 passing yards and 863 rushing yards secured his spot as the 33rd-best national athlete per Rivals.com and the 63rd-best per ESPNU. In his decision to head to Tuscaloosa, Sims turned down FSU, Georgia, Michigan, Mississippi and Tennessee.

5. He Failed to Convert a Last-Second 2-Point Conversion in the State Title Game

At the Georgia Dome on an unusually chilly night in Atlanta in December 2009, Sims took his Gainesville Red Elephants down by 7 with 50 seconds left in the game — toward the endzone. As time expired, the quarterback connected with a receiver on a 25-yard pass to bring his team within one point.

But during the 2-point attempt, an opposing linebacker snuffed Sims’ pass on a slant route. With the incompletion, the Red Elephants lost 13-12, stymied at the 3-yard-line. Despite his team’s 14 consecutive wins, Sims could not bring what could have been a first championship home for the 96-year-old program.