With Tony Romo nursing a surgically repaired back, Brandon Weeden is expected to start at quarterback when the Dallas Cowboys open their preseason schedule tonight in San Diego.

Weeden has had an unconventional career, to say the least. He played minor league baseball through the 2006 season and later became a 28-year-old All-American quarterback at Oklahoma State.

After spending two seasons with the Cleveland Browns, Weeden signed with Dallas over the offseason to be Romo’s top backup.

1. He Was the Oldest 1st Round Pick in NFL History

When the Browns drafted the 28-year-old Weeden with the 22nd overall pick in the 2012 draft, he became the oldest first-round pick in NFL history.

Weeden started 20 games over the 2012 and 2013 seasons for Cleveland, throwing 23 touchdowns and 26 interceptions as Cleveland continued to struggle.

The Browns released Weeden after the team finished 4-12 in 2013, a year after they went 5-11 in Weeden’s rookie year. The Cowboys signed him as a free agent five days later with the intention of having him be third third-string quarterback. But when the team cut Kyle Orton before training camp, Weeden moved up a spot to No. 2 on the depth chart, paving the way for Thursday night’s start.

Weeden was selected in the second round of the 2002 MLB draft by the New York Yankees. He was selected ahead of Curtis Granderson. He was soon sent to the Los Angeles Dodgers as part of a 2003 trade for Kevin Brown. Eventually he wound up with the Kansas City Royals before finishing his professional baseball career in 2006 with the Class-A High Desert Mavericks.

3. His Wife, Melanie, Thought He Had ‘Lost His Mind’ When He Decided to Play Football

By the spring of 2007, it was clear Brandon’s once-promising baseball career was over.

But Melanie Weeden, who he’d marry in 2009, was shocked when Brandon told her he was going to pursue

“I didn’t think he was being serious,” Melanie told the Arizona Republic in 2011. “He’s been home less than a week, not time to even digest baseball was over. I thought he’d lost his mind. I guess I need to learn to trust him.”

Not only did this delivery boy receive a fat tip from Mr. Weeden, Weeden remembered who he was, retweeted his mention, and thanked him for his service.

Thanks for the quick delivery! #JimmyJohns RT @haftashaft: @bweeden3 is an amazing tipper… Just saying #GoBrowns

Weeden also can be generous when it comes to charitable causes:

Coach Brooks and @bweeden3 both donated $1,000 to Make-A-Wish foundation in my name tonight!! Thank you!! More kids get their wishes! 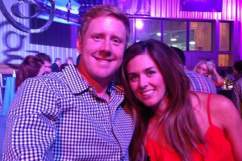