Johnny Manziel may be the Cleveland Browns’ most famous quarterback, but at least for now, he’s not the starter. That distinction still belongs to Brian Hoyer, who will split reps with Johnny Football in tonight’s preseason game at Washington.

Hoyer, who grew up in Cleveland idolizing Bernie Kosar and dreaming of playing for the Browns, is entering his sixth season but has never started a season atop a team’s depth chart.

He emerged as Cleveland’s starter last year after Brandon Weeden was injured and went 3-0 before an ACL tear ended his season in October.

Hoyer had been a career backup when signed a two-year deal with his hometown team prior to the 2013 season, and with Weeden and Jason Campbell established as the team’s top two quarterbacks, it looked like that trend would continue.

But Weeden sprained his thumb in the second game of the season and the team opted to cut Campbell rather than promoting him. That suddenly put Hoyer in his dream job: QB1 for the Browns.

And for the most part, he played well once he got the job, throwing 5 touchdown passes and just 3 interceptions and leading the Browns to three straight wins.

The job would have likely been Hoyer’s to lose for the rest of the season, but he tore his ACL during a 37-24 win over Buffalo on October 3, ending his season.

Cleveland released Weeden after the season, leaving Hoyer as the incumbent and eventually, the man competing with Manziel for the starting job.

2. He Was Tom Brady’s Backup for 3 Years

Hoyer celebrates his touchdown against the Tennessee Titans on October 18, 2009 at Gillette Stadium in Foxboro, Massachusetts.The Patriots beat the Titans 59-0. (Getty)

Hoyer went undrafted out of Michigan State, but the New England Patriots signed him as a rookie free agent in 2009, leading to three years in one of the most interesting (but anonymous) jobs in football: Tom Brady’s backup.

Brady made every start during Hoyer’s three years on the team, leaving Hoyer to only play only in garbage time. He made the ultimate garbage time appearance on October 18, 2009, when he threw his first career touchdown pass during a record-setting 59-0 rout of the Tennessee Titans.

Hoyer played in only 13 games and completed 27 passes with New England, but he gained the admiration and friendship of Brady, who raved about Hoyer in an email exchange with Cleveland.com’s Mary Kay Cabot last year.

Brian was a great player who worked hard to develop himself into a starting caliber NFL quarterback. Nobody worked harder or committed himself more than Brian. He’s a great friend and I’m not surprised that he’s succeeded once he got an opportunity. He has everything it takes physically and mentally to play the position,” said Brady. “He loves football and works hard at getting better.

The Patriots drafted Ryan Mallett in the third round in 2011, and when Mallett beat out Hoyer for the backup job, the Pats cut Hoyer during camp in 2012.

Hoyer eventually signed with the Pittsburgh Steelers, but was cut before appearing in a game. He caught on with the Arizona Cardinals and started one game for them in 2012, throwing one touchdown and two interceptions. After he was released by the Cardinals, he signed a two-year deal with the Browns before the 2013 season.

3. He’s No. 3 on the Career Passing List at Michigan State

His 13 200-yard passing games are third most in school history.

The Spartans went 16-10 during Hoyer’s two years as a starter, losing in the 2007 Champs Sports Bowl to Boston College and the 2008 Capitol One Bowl to Georgia.

4. He Grew Up in Cleveland & Was a Star High School Baseball Player

Hoyer waves to the crowd before throwing the first pitch at Progressive Field in Cleveland before the Indians-White Sox game on July 12. (Getty)

Hoyer was a two-sport star at St. Ignatius High School, where his track record as a pitcher was as impressive as anything he did on the football field.

Hoyer re-connected with his baseball roots on July 12, when he threw out the first pitch at Progressive Field before the Indians’ game against the White Sox and got to pose for a picture with childhood hero Sandy Alomar Jr.

And he re-connected with St. Ignatius after the Patriots cut him in 2012, calling coach Chuck Kyle and asking if he could come down to the field and throw some balls with the team’s players in order to stay in shape.

I met Sandy Alomar as a kid. 15 years later I got to throw out the first pitch to him. Thanks again @Indians pic.twitter.com/ImlK7b28kL

Hoyer married his high school sweetheart, the former Lauren Scrivens, while he was with the Patriots in 2010. The couple has two kids.

You can read about their wedding on the blog run by Scott E. Jones, who served as the couple’s DJ.

Here’s how Jones described the evening:

I was really looking forward to my Friday Night wedding reception with Brian and Lauren. Lauren & Brian met while they were in high school and Brian was playing football for St. Ignatius. Fast forward about 10 years and they are living in Foxboro and Brian plays quarterback for The New England Patriots. To say that I was not excited and impressed is an understatement. I had a lot of fun working with this couple throughout the entire process. They are two very down-to-earth and fun people and their families welcomed CJ and I into their lives (for those 6 hours) with open arms. A good time was had by all. 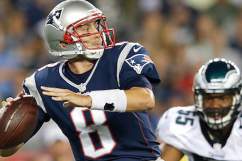 Brian Hoyer Photos: The Pictures You Need to See

Loading more stories
wpDiscuz
0
0
Would love your thoughts, please comment.x
()
x
| Reply
All eyes will be on Brian Hoyer when he starts at quarterback for the Cleveland Browns Saturday and continues to battle Johnny Manziel for the top QB job.