Todd (left) and Gregory appearing together on a Meet the Press roundtable in 2007, when Gregory was NBC’s White House correspondent. (Getty)

After years of speculation that David Gregory was in danger of losing his job as anchor of NBC’s Meet the Press, the network is finally making the move.

The 43-year-old Gregory, who has hosted TV’s longest-running show since shortly after Tim Russert’s death in 2008, will be axed as MTP host and replaced by Chuck Todd, NBC’s political director, White House correspondent and resident politics junkie.

Read on for more about the changing of the guard and the man who will take over the anchor’s chair.

CNN’s Brian Stelter, a former New York Times reporter considered one of the most plugged-in on the media beat, reported Thursday that the anchor swap is imminent — so imminent, in fact, that Gregory won’t even host the show on Sunday.

The people spoke on condition of anonymity because they were not authorized to comment on the record. One said that the transition will be swift — so swift that Gregory will not even host “Meet the Press” this weekend.

The CNN report comes four days after Polito’s Mike Allen reported that an announcement would be made in the “coming weeks.”

2. NBC Is Trying to Restore ‘Insider Cred’ Amid Sinking Ratings

Gregory, once considered a rising star in the business and a potential successor to Matt Lauer as host of the Today show, has been the subject of rampant speculation as the show has gone from first place to third in ratings among Sunday public affairs shows, slipping behind ABC’s This Week and CBS’s Face the Nation.

There are differing opinions about the reason for the ratings drop, among them that it simply that the shoes of the legendary Russert were so big that no one could have aptly filled them.

But one perceived problem with Gregory is that despite his on-air polish, he’s not enough of a political junkie. Todd, though not as smooth, has ample “insider cred” — a leading factor in NBC execs deciding to make the move.

The move is an effort by NBC News President Deborah Turness to restore passion and insider cred to a network treasure that has been adrift since the death in 2008 of the irreplaceable Tim Russert. Although Todd is not a classic television performer guaranteed to wow focus groups, his NBC bosses have been impressed by his love of the game, which brings with it authenticity, sources, and a loyal following among newsmakers and political junkies.

Todd, 42, who succeeded Gregory as White House correspondent in 2008 and hosts the Daily Rundown weekdays at 9 a.m. on MSNBC, has been a staple of NBC’s election coverage, often appearing as a guest on Meet the Press to break down election maps and vote totals.

Watch him in the video clip above talking on Morning Joe about a recent NBC/Wall Street Journal poll being a “disaster” for President Obama. 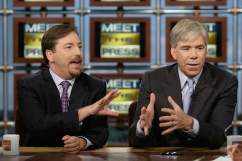 Chuck Todd Photos: The Pictures You Need to See

Stelter reported Thursday that Gregory is expected to leave the network after the news is announced, marking the end to an ugly period of speculation.

As Stelter put it:

An announcement about Todd’s promotion would end an ugly period of public conjecture about Gregory’s fate, made worse by the network’s tepid statement of support for him earlier this summer.

The network has given Gregory several luke-warm votes of confidence amid rampant speculation about his demise.

…and in euthanasia news, David Gregory is out, Chuck Todd in as host of Meet the Press http://t.co/q7Fj9Htr1Y according to @brianstelter.

After the news of Gregory’s exit was widely reported, he confirmed on Twitter that he was leaving the network.

I leave NBC as I came – humbled and grateful. I love journalism and serving as moderator of MTP was the highest honor there is . (1 of 2)

(2 of 2) I have great respect for my colleagues at NBC News and wish them all well. To the viewers, I say thank you.

One of the many factors in Todd’s favor is his prolific use of and huge following on Twitter, where he tweets about a healthy dose of sports. He’s a Miami native and tweets frequently about University of Miami football during the season, but throws in plenty of baseball and other sports, as well.

Frank Thomas' speech is why there are Hall of Fame ceremonies. Great speech. Loved the emotion and the subtle steroids lecture.

As a Miami guy, I simply say thank you to Lebron. What a ride. Hope Heat fans look at upside. The man wanted to go home. Good for him

5. Prior to Joining NBC, Todd Was Editor in Chief of ‘The Hotline’

Todd joined NBC’s talent roster in 2007 as political director after serving for five years as editor in chief of The Hotline, a politics site powered by the National Journal.

Chuck Todd is one of the most experienced political journalists in this country, and NBC has been the beneficiary of that on an informal basis through the years with his appearances on our programs. Today’s announcement formalizes and expands his role with NBC News, underscoring the strength of our partnership with National Journal.

Todd is married to Kristian Denny Todd, who co-founded a consulting and direct mail business called Maverick Strategies and Mail. The couple lives in Arlington Virginia with their daughter, Margaret and son, Harrison. 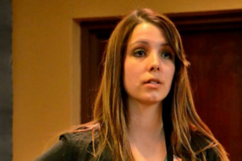 Loading more stories
wpDiscuz
0
0
Would love your thoughts, please comment.x
()
x
| Reply
David Gregory is out and political junkie Chuck Todd is in as anchor of NBC's Meet the Press.