The NFL’s vice president of officiating is being accused of giving preferential treatment after TMZ caught him on tape, featured above, getting off a Dallas Cowboys party bus and walking into a club in Los Angeles.

Dean Blandino, was seen in the video partying with Dallas Cowboys EVP Stephen Jones, the son of team owner Jerry Jones. Several high-ranking team executives, even those on teams that aren’t Cowboys’ main rivals, are calling Blandino’s actions a conflict of interest, according to CBS.

That’s definitely Dean. Is the league trying to tell you it’s not him? What is the league telling you guys about it? That looks horrible. I can’t think of another owner in the league who wouldn’t be pissed off after seeing that.

So, should I have my owner take him to a strip club when he visits us? Is that how it works? We like Dean a lot, but let me tell you, if that was him out with (the owner of a rival of the club this official works for), my owner would be going nuts. This just can’t happen.

So far, the NFL and Blandino have not made comments about the video.

2. Stephen Jones Is a Member of the League’s Competition Committee

Blandino’s actions are considered even more egregious because of Stephen Jones’ position as a member of the NFL’s influential Competition Committee, which, “studies all aspects of the game and recommends rules and policy changes to NFL clubs,” according to the league’s website.

Whether or not this would in any way affect Dean’s ability to be impartial with the Cowboys is really not the issue. This gives the appearance of impropriety. If I am a fan of a team facing the Cowboys, or I work for a team that’s facing the Cowboys, I’m upset by this. There shouldn’t be any situation like this going on that could cloud his judgment. How is this protecting the shield? The league loves to throw that term around when it applies to players. So how is this not an issue now?

3. He’s Done Good Work as the NFL’s Head of Officiating

Before TMZ’s video surfaced, Blandino was highly regarded in the organization, working well with coaches and general managers, according to CBS. Blandino is credited with modifying the league’s “tuck rule,” which now says any time a player loses control of the ball while trying to tuck it towards his body, it’s considered a fumble, according to AtlantaFalcons.com.

According to a release from the NFL, Blandino was a member of the league’s officiating department for 15 years before he was promoted. He founded his own company in 2009 called Under the Hood, which provided training and evaluation for replay officials, according to the NFL. Blandino took over for Carl Johnson, who became the NFL’s first full-time game official, the league reports.

5. Reporters Were Trying to Interview Jones About Scandalous Photos of His Father

In the footage taken by TMZ, reporters can be heard asking Stephen Jones about scandalous photos of his father, Jerry Jones, posing with and groping various women. The photos were released by a man named Frank Hoover, who claims he is the son of God. 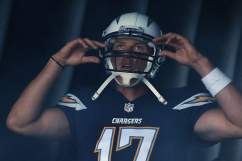 Loading more stories
wpDiscuz
2
0
Would love your thoughts, please comment.x
()
x
| Reply
Dean Blandino, the NFL's head of officiating, has been heavily criticized by league executives and clubs after a video surfaced of him getting off a Dallas Cowboys party bus and walking into a Los Angeles nightclub with Stephen Jones, Dallas-owner Jerry Jones' son.