Shaw has been in the national headlines for two entirely different reasons this week: First as a hero who claimed to have sprained both ankles while jumping off a balcony to save his 7-year-old nephew from drowning, then as a fraud who admitted to team officials that he lied about the incident.

In announcing Wednesday that Shaw had been suspended indefinitely, the team said Shaw had hired Donald Etra as his attorney and that Etra would soon be issuing a statement on Shaw’s behalf.

According to a bio on Etra’s website, the attorney represented The Nanny star Fran Drescher in a 1999 lawsuit brought by a stuntwoman who claimed she was injured during filming of the Beautician and the Beast.

Etra represented Snoop Dogg twice in 2007: One when the rapper was charged with transporting marijuana and once after he was arrested at John Wayne Airport in Orange County after authorities found a collapsible baton in his bag.

He also represented Rihanna in the 2009 criminal case against her then-boyfriend Chris Brown.

He worked for Nader from 1971-73 and co-authored “Citibank, The Nader Report on First National City Bank.”

Nader rose to fame as a consumer advocate in the 70s and later ran for president in every election from 1996 to 2008.

In 2000, he received 2.7 percent of the vote, drawing criticism from Democrats who said he pulled enough liberal support away from Al Gore to tip the election to George W. Bush.

3. He Grew Up in New York & Has Degrees from Yale & Columbia

Ela was born in New York City and attended the Horace Mann SChool in Riverdale before graduating from Yale in 1968.

He got his MBA and law degree from Columbia in 1971 and was admitted to the New York state bar the same year.

He was admitted to the District of Columbia and California bars in 1978.

In 1995, he founded the Law Offices of Donald Etra, where he’s a partner and the head of the firm. According to his website, his practice includes criminal law, drug crimes, DUI, felonies, sex crimes, juvenile crimes, misdemeanors, parole and probation, state and federal criminal defense, theft, traffic violations and white-collar crime.

Josh Shaw lawyer Donald Etra on how Shaw got hurt: "He fell off a balcony. We are not discussing any further details at this point."

More Etra on Shaw: "It is my understanding that there is no further investigation. The reason for that is, nothing criminal happened."

Why did Shaw hire Etra? "He hired me to get advice. When people want guidance they hire lawyers who know what they’re doing. Josh did that"

Etra told the Orange County Register’s Michael Lev that it’s his understanding there’s no criminal investigation into anything involving Shaw.

His comments come a day after TMZ reported that Shaw’s name appeared in a burglary report at a Los Angeles apartment complex where Shaw’s girlfriend lives and where a resident told cops a man fitting Shaw’s description was seen “shimmying” down a fire escape. 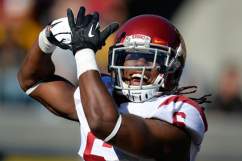