A New York City medical examiner has ruled that the death of a man during an arrest was caused by the police officer’s chokehold. The death is now being considered a homicide.

The spokesperson for the medical examiner, Julie Bolcer, told the Associated Press that the death was caused by, “the compression of his chest and prone positioning during physical restraint by the police.”

Eric Garner, the Brooklyn father of six whose final moments were caught in the video above, died July 17 in Staten Island. Garner was asthmatic and weight 250 pounds. His death has sparked public outrage over well-documented brutal NYPD tactics.

The police officer in the green shirt who puts Garner in the chokehold is 8-year NYPD veteran Daniel Pantaleo. Pantaleo has been sued twice for civil rights violations. You can read more about him here. 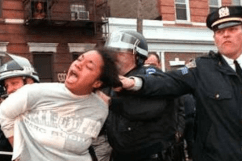 Loading more stories
wpDiscuz
1
0
Would love your thoughts, please comment.x
()
x
| Reply
A police chokehold killed Eric Garner, the man whose last moments were caught on video, according to the medical examiner.