Few officials have gotten more public scrutiny over the past week than Thomas Jackson, the chief of the Ferguson, Missouri police department.

Jackson stepped before a horde of media and a national TV audience Friday morning to talk about details of Michael Brown’s shooting, including the identity of the police officer who shot the unarmed black teenager to death on August 9.

1. Jackson Said Friday That the Cop Who Killed Michael Brown Was a ‘Nice Young Man’

In a press conference Friday morning, Jackson identified the officer who shot and killed Brown as Darren Wilson, a six-year veteran of the Ferguson police force who Jackson said is a “nice young man” who’s devastated by Brown’s death.

The officer has been placed on administrative leave, according to the St. Louis Post-Dispatch.

NBC News’ reporter Tom Winter tweeted that in February, Wilson was awarded a commendation for “extraordinary effort in the line of duty.”

2. The Missouri Highway Patrol Has Taken Over the Scene in Ferguson From Jackson’s Officers

Governor Jay Nixon sent in the state highway patrol to take over the scene in Ferguson, and there’s been a marked difference in the tenor of the protests.

Local officers, who had come under heavy criticism for deploying tear gas and pointing military-style weapons at protestors, are taking a backseat to the highway patrol, whose commanders have ordered a chance in approach.

Captain Ron Johnson and other officers have embraced some of the protesters, and Johnson joined some of them in marching through the street on Thursday.

The difference in tactics and tone was apparent almost immediately here. On Thursday night, the armored vehicles and police cars were gone, and the atmosphere was celebratory. A street barricaded on previous nights was filled with slow-moving cars blasting their horns. There were few signs of police officers, let alone a forceful response.

3. Jackson Has Been Criticized for Taking Almost a Week to Release Wilson’s Name

Outrage had been building as days went on and Jackson, citing the ongoing investigation, declined to release the name of the officer who shot Brown.

According to the Times, Jackson told a St. Louis TV station that officials decided Thursday that they would release the officer’s name.

A lot of the stakeholders had a big meeting conversation yesterday, and then yesterday evening, and we made the determination that today is the day. Nothing specific went into that decision, but we feel that there’s a certain calm. There’s a huge outcry from the community.

4. Jackson Went on Sean Hannity’s Show to Defend the Cops’ Response to Protesters

Jackson went on Sean Hannity’s show on Fox News to praise his officers’ reaction to the protests, saying he was proud that no protesters had been injured despite officers, including Jackson, being fired at. Watch the video above.

Hannity opened the interview by asking Jackson to respond to comments made by President Obama, who said in a statement from Martha’s Vineyard that there was no excuse for violence against police but also no excuse for police using excessive force against protesters.

I’m glad glad that he was able to speak out and say that there’s no excuse for violence against police and to use this incident as starting ground for looting and crime. I talked to some people from the Justice Department today and I think he’s probably going to be briefed a little bit differently. During this whole thing these several nights of riots and all the arrests we’ve made and all the conflict, not a single protester has been injured, and I’m extremely proud of that.

5. Jackson Said Michael Brown Was a Suspect in a Robbery, but the Robbery Was Unrelated to the Shooting

Jackson said Friday that Brown was the suspect in “strong-arm robbery” of a convenience store, just prior to the shooting. The robbers are alleged to have stolen cigars. The police report states that Brown “grabbed” a store clerk and “pushed him back” after stealing “numerous packs of cigars.” But he said at a news conference later in the day that the confrontation between the officer and Brown had nothing to do with the robbery.

Police put out images from surveillance video showing a man identified as Brown involved in a confrontation with a clerk. But hours later, he acknowledged the officer didn’t even know Brown was a suspect in the robbery and had stopped him because he was walking in the middle of the road, blocking traffic.

Jackson came under a barrage of criticism for what critics called a character assassination on Brown.

#Ferguson police chief confirms Darren Wilson stopped #MikeBrown because he was walking in the street not because of the robbery!

What #Ferguson Chief of Police Thomas Jackson did was outrageous!

These stories aren't adding up. Somebody is lying.They're protecting their own. Mike Brown didn't deserve to die. I'm sick. #Ferguson

Info handed out ONLY about alleged robbery. NO info included about interaction with Officer Wilson, the shooting.

Brown’s friend, Dorian Johnson, has also been named as a suspect in the convenience store robbery. 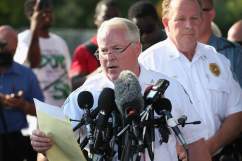 Loading more stories
wpDiscuz
1
0
Would love your thoughts, please comment.x
()
x
| Reply
Chief Thomas Jackson is near the center of the firestorm over the killing of Michael Brown by Ferguson police officer Darren Wilson.