With few exceptions, Florida State steamrolled its competition last year en route to an undefeated season and a national championship.

The win the top-ranked Seminoles came away with Saturday night at AT&T Stadium in Arlington, Texas didn’t come so easily.

Jameis Winston and Co. got all they could handle from unranked Oklahoma State, but a pair of touchdowns orchestrated by Winston — one rushing, one throwing — helped give the defending champs a 37-31 win in the season opener for both teams.

Click here for the full box score and read on for a roundup of highlights.

Florida State looked poised to run the Cowboys out of the building when Mario Pender’s 11-yard touchdown run capped an 8-play, 94-yard drive and made it 17-0 with 8:19 left in the first half.

The Noles got on the board with a 36-yard Roberto Aquayo field goal with 8:51 left in the first quarter and stretched the lead to 14-0 when Nate Andrews intercepted J.W. Walsh’s pass and returned it 9 yards for a touchdown 14 seconds later.

Walsh hit David Glidden for a 55-yard touchdown strike that brought the Pokes within 20-17 with 10:45 left in the third quarter.

Reigning Heisman winner Jameis Winston — who struggled passing for most of the night — took matters into his own hands with a 28-yard touchdown run that made it 27-17 Noles with 5:26 left in the third quarter.

J.W. Walsh Answered With a Rushing Touchdown of His Own

PJ Williams forced and recovered a fumble by Walsh with 4:41 left in the game, and Winston made the Cowboys pay for the turnover two plays later, hitting Rashad Green for a 50-yard touchdown strike that made it 37-24 with 3:58 left in the game.

Oklahoma State still wouldn’t go quietly. Walsh led the Cowboys down the field in a hurry and scored on a 3-yard touchdown run to cap a brisk 7-play, 39-yard drive that ate up only 2:03 of clock and made it 37-31 with 1:55 left in the game.

The Cowboys attempted an onside kick on the ensuing kickoff, but the ball bounced out of bounds. 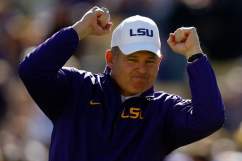