A man living in Dallas is reportedly behind the photos of Dallas Cowboy’s owner Jerry Jones groping and posing with various women, according to Deadspin.

Frank Hoove tweeted the scandalous photos of Jones to various national media outlets saying things like, “God is Here” and “The Sins of Jerry Jones.” According to the 20-page report Hoover wrote, the photos of Jones were taken to set him up in an extortion plot.

According to his 20-page manifesto, Hoover said God gave him the incriminating photos of Jones with a choice. He writes:

God gave me these photos and I was given a choice. I could sell them and ruin your life in the media,make millions and tell my story or I could hold them in secret and suffer until I reached you. So, I gave my own life to save yours. It’s a bold statement and the next statement is even bolder. It may scare you, but you have to believe in who I am. I know this because I am the Son of God and he sent me to you. Jerry,you and the Cowboys are the Star we will use to Light My Path. I spent 5 years suffering, losing all my possessions, giving the rest away to charity and then living poor. I almost lost my mind until God revealed my true identity.

You can read the entire manifesto here:

2. Hoover Implicated Someone Else in the Extortion Plot

According to Hoover’s manifesto, Kevion Montez Hickman teamed up with Hoover to extort money from Jones as a result of the incriminating photos. In the manifesto, Hoover said Hickman had the photos of Jones on a USB drive which he then brought to New York City to sell to paparazzi, including a produce at TMZ, when the USB drive was stolen. Hoover said Hickman used members of the Dallas Cowboys organization to spread rumors of the photos so Jones would try and stop them from being released.

Hoover released the incriminating photos of Jones on his Twitter account, tweeting at various national media outlets. Here are the photos he released:

Jones married his wife, Gene, in 1963. The couple have three children. Jerry Jones is worth an estimated $2.7 billion.

5. Hoover Has His MBA

According to his LinkedIn profile, Hoover earned his MBA at the University of Phoenix in 2005. He studied accounting and information systems at the University of Kansas, where he graduated in 2000. He’s listed as the founder and CEO of TVEX Ventures, LLC, a company in Dallas which designs and develops, “media platforms for the people to make the world more transparent,” according to his LinkedIn profile. 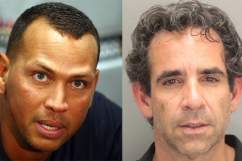