Angels pitcher Garrett Richards went down in pain with an apparent left leg injury while attempting to cover first base Wednesday against the Red Sox.

He was carted off the field on a stretcher with two outs in the bottom of the second and the Angels trailing 2-0 after covering first on a ground ball by Brock Holt.

There was no immediate word on what happened. We’ll update this post when we know more.

Richards had been the Angels’ best starter and one of the biggest reasons the Angels are in first place in the A.L. West heading down the stretch. 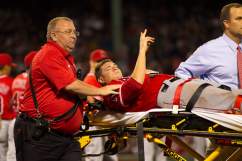 Read More
Baseball, MLB
Angels pitcher Garrett Richards went down in pain while attempting to cover first base Wednesday against the Red Sox.