Hedy Epstein, a prominent 90-year-old Holocaust survivor, has been taken into custody by police in St. Louis over her protesting of the Michael Brown shooting, reports KMOV’s Chris Stanford.

1. She’s Accused of Blocking a Building

Hedy Epstein, a 90 y.o. Holocaust survivor, was among the those arrested for blocking Nixon office bldg. #Ferguson pic.twitter.com/s4y68zFFrF

Epstein was arrested for blocking an entrance to the Nixon building in St. Louis. The St. Louis Business Journal reports that nine protesters were arrested at the building at 4:40 p.m. Eastern time. The group were chanting slogans such as “Face one, face all!” and “Who do you serve? Who do you protect?”

She was released a few hours later and will have to face court on October 21 for a charge of failing to disperse. In an interview after her arrest she said that the “Ferguson police are deliberately inciting violence.”

Police taking Hedy Epstein away. They were nice to her. They took her away in a bus w/ other protesters #Ferguson pic.twitter.com/VP2ni0VrK3 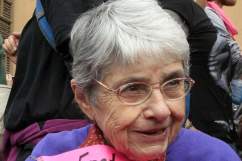 2. Epstein Is One of the Most Famous Pro-Palestinian Activists in the World

Epstein is a world-famous pro-Palestinian activist. Since 2003, Epstein has made five trips to the Gaza Strip. Epstein doesn’t believe peace is in Israel’s immediate future:

I’m an inveterate optimist, so someday there will be peace, but a lot of things have to change before that happens. If the occupation were to stop overnight, it would make all the difference in the world. Israel is the fourth-largest military entity in the world. They have the newest equipment, and it’s used on the Palestinians. Also, if the U.S. stopped funding Israel, that would be another way of bringing about peace. We have humongous problems in this country, people are unemployed, losing their homes, we could use that money instead of overseas in a destructive way. Let’s use it constructively. I think we should let the people decide what they want instead of telling them what they should do.

3. Most of Her Family Perished in Concentration Camps During WWII

Epstein lost all but two of her family members at Auschwitz. According to her Twitter page, Epstein was born in Germany in 1924. Her only remaining family members were were an uncle and aunt who moved to the U.S. in 1938. You can watch a short documentary about her incredible journey here:

4. Epstein Helped in the Nuremberg Trials

According to her official website, after World War II, Hedy went back to Germany (she had lived in England in the immediate aftermath of the war). While in Germany, she was employed by American prosecutors during the trials of doctors accused of performing unnecessary medical treatments on concentration camp inmates.

Epstein has lived in St. Louis for many years, moving there after emigrating to the U.S. in 1948. In 2001, she founded the St. Louis chapter of the Women in Black, an anti-war movement.