1. The Cause of Death Is Unknown

College officials have said that Hackendahl was found unresponsive inside the Zeta Tau sorority house at 8 p.m. on August 28. Paramedics tried to bring her back to life for an hour, she was pronounced dead at 9 p.m. Fox 59 reports that counselors are being made available to grieving students. A vigil will be held in her honor on September 2 at 9:30 p.m. at the the Showalter Fountain in IU.

2. She Was Studying to be a Teacher

The entire campus is deeply saddened by the death of student Kelly Hackendahl. Our condolences go out to family and friends for this loss.

Indy Star reports that Hackendahl was studying to a degree in education. She was just about to start her junior year

She was a native of Libertyville, Illinois and was a member of the Zeta Tau sorority. Her last Facebook activity was on August 4 where posted the above photo. 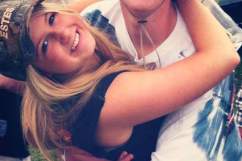 4. She Was a Decorated Student

In 2012, Hackendahl had one of IU’s highest GPAs. She was placed on the list of “University Division of Scholars of High Distinction.”

5. This Is the Latest Tragedy to Impact Indiana University

Our deepest condolences to the family & friends of IU sister Kelly Ann Hackendahl. Thanks, Hoosier community, for your love & support.

The Indy Star reports that there have been a number of tragedies to impact the school over the last 12 months. In August 2013, Rachel Fiege, 19, died after a fall. Then in October 2013, Abigal Bott, died of an overdose in her dorm room.