Corey Griffin, a good friend of Peter Frates, was one of the inspirations behind the ALS Ice Bucket Challenge. Tragically, Griffin drowned in an accident in Nantucket on August 16, reports CBS Connecticut. He was 27 years old.

1. Griffin Died After Jumping Off an Ice Cream Store Into the Water

Griffin died around here, in the water at New Whale Street in Nantucket. (Google Street View)

At around 2 a.m., the Boston Globe reports that Griffin jumped of a building on Nantucket’s Straight Wharf. After the dive, Griffin resurfaced briefly but slipped under the water again. He did not resurface this time. His body was recovered by an off-duty lifeguard who brought him to shore. Griffin was rushed to hospital where he was pronounced dead at around 3 a.m. Police are still investigating the incident.

According to his father, Robert, Griffin was in Nantucket to do more fundraising for ALS. His dad said his son was “so happy to help [Frates]” and that Griffin was “tortured” by Frates’ ordeal. Griffin was involved multiple charities. A friend, Michael Greely, told WHDH:

He threw himself behind a lot of causes. Way more so than anyone, you know, of our generation. And just put his heart and soul behind these things. He did it for Boston Children’s Hospital. He has been doing it more recently for ALS.

Corey turned that into a positive. He helped organize the first NHL alumni hockey tournament that raised money for brain injuries through the children’s hospital. He took the tough experience that he had that really impaired his hockey future and turned it into a positive and gave something back.

3. Peter Frates Paid Tribute to His Friend on Facebook

His father said that after he raised the money for the cause, Griffin was “the happiest guy in the world,” 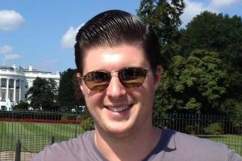 RIP Corey Griffin: The Pictures You Need to See

Griffin was a former hockey player at Boston College, in his sophomore year, however he transferred to Babson College. His former coach at BC, Jerry York, said, “We were extremely shocked and saddened to hear of the death of Corey. Our thoughts and prayers are with his family and friends.”

We are deeply saddened by the tragic loss of Corey Griffin '10. Our thoughts and prayers are with the Griffin Family. There are no words

5. He Previously Worked at Bain Capital

According to his LinkedIn page, Griffin was previously employed by Bain Capital. At the time of his death, Griffin worked for RANE in risk assessment. He was based in New York City but was a native of Hingham, Massachusetts. According to the Boston Globe, Griffin was the oldest of three children, his brother, Michael, 25, and his sister, Casey.

RIP Corey Griffin: The Pictures You Need to See