The terrifying terror group that has seized half of Iraq now possesses a weapon of mass destruction that could put Baghdad under 15 feet of water.

Locals say that today the Islamic State, formerly known as the Islamic State of Iraq and Syria (ISIS), captured Iraq’s largest dam outside the city of Mosul. The strategic victory has sparked fear that the dam could be used as a weapon.

Located 225 miles further up the Tigris river from Baghdad, and just outside of the city of the populous city of Mosul, the dam could be used to cover much of the country in water. ABC News reports that if ISIS intends to flood the region, Mosul could be flooded with 65 feet of water, creating a wave that could also affect Baghdad, with estimates of civilian casualities reaching up to 500,000.

The dam provides the power for Mosul, one of Iraq’s largest cities, with a population of over 1.5 million people. 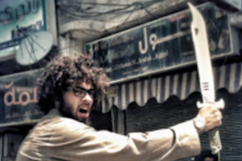