If Tuesday was a sign of things to come, Cubs fans have a whole lot to look forward to with Javier Baez.

The stud infield prospect, called up from Triple-A Iowa before Tuesday night’s game in Colorado, hit an opposite-field home run in the top of the 12th that put Chicago on its way to a 6-5 win.

According to the Elias Sports Bureau via ESPN, Baez is the first player to hit a go-ahead homer in the 12th inning or later of his Major League debut since Kent Hrbek did it for the Twins in 1981. 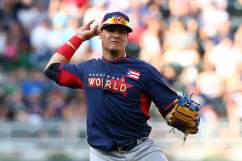