Shannon and Gina Kepler, a married couple in the Tulsa Police Department, have been arrested in connection with the slaying of their daughter’s boyfriend, reports News 9 Oklahoma.

The victim, 19-year-old Jeremy Lake, was found gunned down in Tulsa on the night of August 5. At the time of the shooting he was walking down the street with the couple’s daughter, 18-year-old Lisa.

After being contacted by police regarding the crime, Gina Kepler agreed to surrender with her husband. They arrived at their police station with a lawyer, and both were taken into custody. The gun used in the crime has not been found. It was not a service weapon.

2. Shannon Also Took a Shot at His Daughter, According to Cops

The Kepler’s with their other two daughters in 2013. (Facebook)

According to Tulsa PD spokesperson, Jill Roberson, who was speaking to CBS News, the Keplers drove their car toward where their daughter and Lake were walking. Lake introduced himself as the girl’s boyfriend, at which point shots rang out. Roberson told CBS:

According to News On 6, the Keplers couldn’t have their own children and decided to adopt. They adopted Lisa first, when she was 6 years old, and then her younger sister.

Neighbors told reporters that both girls suffered from “reactive attachment disorder.” This led to problems in the home. Lisa Kepler admitted there had never been any violence in the home.

After years of trying to help Lisa, friends say that her parents had enough when she turned 18 and dropped her off at a homeless shelter. Friends say that Gina Kepler cried every night worrying about her daughter.

Gina Kepler made several pro-gun posts, on her Facebook page, including this in May 2013:

On the 13th of June, Shannon Kepler posted a pic of Clint Eastwood as Dirty Harry, in addition to a picture of his police badge:

Gina Kepler made this her Facebook cover image on July 16. (Facebook)[/caption]

Lisa Kepler told Tulsa World that her parents had recently kicked her out of the family home due to “poor life decisions.” She said she hoped her dad “rotted” in prison. Kepler added that she met Lake at a homeless center in Tulsa. 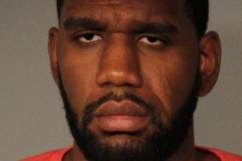 Loading more stories
wpDiscuz
6
0
Would love your thoughts, please comment.x
()
x
| Reply
Shannon and Gina Kepler, both cops with the Tulsa PD, have been arrested in connection with the slaying of their daughter's boyfriend, whom she met at a homeless shelter.