Minute before connecting with Dion Lewis for his first career touchdown pass, Johnny Manziel was the talk of Twitter for a different reason.

As the rookie jogged toward the middle of the field late in the third quarter during Monday night’s game against the Redskins, Manziel gave a very nonchalant one-finger salute to the Redskins bench.

Coach Mike Pettine said at his postgame press conference that he wasn’t happy about the gesture and would address it with Manziel.

Manziel, for his part, said in his postgame press conference that he’s constantly exchanging words with opponents but “needs to be smarter” with the Monday Night Football cameras pointed at him.

Manziel: "I get words exchanged with me throughout the entirety of the game week after week. … I need to be smarter than that." 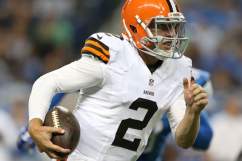 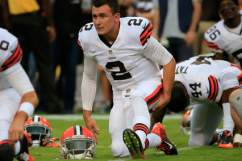