Johnny Manziel provided a bright spot in what has otherwise been another lackluster offensive showing by the Browns when the rookie QB picked up his first career rushing touchdown Saturday night against the Rams.

With Cleveland trailing 23-7, Manziel scrambled 7 yards for the score with 6:55 left. Billy Cundiff’s extra point made it 23-10.

The score comes less than a week after coach Mike Pettine named Brian Hoyer Cleveland’s Week 1 starter, but also said a 2-quarterback system involving Manziel was “on the table.”

It also comes less than a week after the league fined Manziel $12,000 for flipping off the Redskins’ bench during Monday night’s game in Washington.

Hoyer started Saturday and went 10-for-16 passing for 84 yards, 1 touchdown and 1 interception. 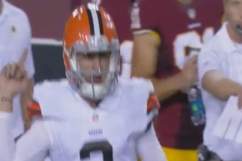