With Monday’s news that Heisman candidate Braxton Miller re-injured his surgically repaired shoulder, redshirt freshman J.T. Barrett could be next in line to be Ohio State’s starting quarterback.

Watch the video above to hear Barrett talk about his increased level of confidence and read on for more about his background.

1. He Had Been Battling With Cardale Jones for the Backup Job

Barrett entered training camp behind both Miller and sophomore Cardale Jones on the Buckeyes’ depth chart. But coach Urban Meyer and offensive coordinator Tom Herman recently told reporters that Barrett had jumped Jones and taken over the No. 2 spot.

Herman told Cleveland.com that the offense “moves better” with Barrett under center than with Jones:

The offense moves better when he’s in there. You can throw all the completion percentages – he’s probably completing more balls and making more of the right reads in the run game.

But at the end of the day, the offense moves when he’s in and sometimes it doesn’t as much, not that Cardale is doing a bad job, but the offense moves more frequently when J.T. is the quarterback, and that’s the sign of a good one.

Barrett and Jones had split first-team reps in spring practice as Miller recovered from surgery.

2. He Was a 4-Star Recruit Out of Wichita Falls, Texas

Barrett was a four-star recruit and one of the most highly regarded quarterback and cornerback prospects in the country out of Rider High School in Wichita Falls, Texas. Watch the video above for a highlight feel of his senior year.

247Sports ranked him the No. 11 player in Texas his senior year, and Scot, 2474Sports and ESPN rated him a top 150 player in the country.

Barrett rushed for 569 yards and 7 touchdowns and passed for 784 yards and 5 scores during his senior year at Rider before an ACL tear ended his season.

According to the Columbus Dispatch, here’s how Herman described Barrett at Ohio State’s media day:

Gets the ball out quickly. Very efficient. Smooth release. Very accurate. Extremely cerebral. Very magnetic leader. I think the kids kind of gravitate towards him.

We’ve got to work on strengthening his arm. He’s a distant third to Braxton and Cardale in terms of just rearing back and trying to throw it through a wall. But he makes up for it in his anticipation and his accuracy and all that. You don’t have to have a howitzer to be successful in college football. I’m very pleased with his continuing growth.

4. He Redshirted Last Year While Recovering From Knee Surgery

Barrett enrolled at Ohio State in January 2013 after tearing his ACL during his senior year at Rider High. He redshirted during the 2013 season while recovering from knee surgery and has never appeared in a game.

That draws a star contrast between Barrett and Miller, a senior listed on virtually every preseason Heisman watch list.

J.T. is short for John Thomas, a name given to him by his parents, Stacy and John Barrett. A communications major, Bartett has two brothers: Xavier and Stephen. 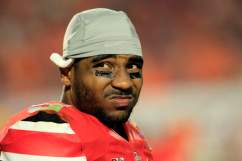