What a difference a half makes.

No. 14 Wisconsin was in control at the half — and early in the third quarter — Saturday night against 13th-ranked LSU. But the Tigers rallied for 21 unanswered points and came away with a 28-24 win at NRG Stadium in Houston.

Click here for the full box score and read on for a roundup of highlights.

Reggie Love’s 45-Yard Touchdown Put Wisconsin on the Board

Reggie Love, a third-year sophomore wideout who sat out last year as a redshirt, ran for 45 yards for a touchdown on his first career carry, putting the Badgers on top 7-0 with 9:05 left in the first quarter.

Rafael Gaglianone, a freshman from Brazil via Chattanooga who was a standout high school soccer player, booted a 51-yard field goal with 5:07 left in the first quarter.

The Tigers got on the board in spectacular fashion when Travin Dural began and ended a scoring drive by catching a pass from Anthony Jennings and taking it 80 yards to the house to make it 10-7 with 4:47 left in the first quarter.

The Badgers stretched the lead back to 17-7 on a 15-yard touchdown run by Melvin Gordon with 7:36 left in the first half.

Corey Clement scored from 2 yards out to cap a 6-play, 75-yard drive to open the third quarter for the Badgers and make it 24-7. But it was all Tigers for the rest of the third quarter and into the fourth quarter.

After a pair of Colby Delahoussaye field goals brought the Tigers to within 24-13, Anthony Jennings hit John Diarse for a 35-yard touchdown strike that brought LSU within 5 with 12:08 left in the game. Les Miles then elected to go for 2 and LSU converted on a Jennings pass to Trey Quinn that made it 24-21.

LSU took its first lead of the game when Kenny Hilliard scored on a 28-yard touchdown run with 9:41 left in the game. 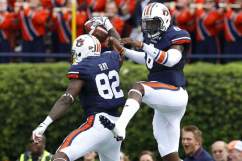