A private autopsy of the unarmed black teen who was shot dead by a police officer in Ferguson, Missouri, has revealed shocking new details that are further fueling the protests that continue in the wake of the killing.

Here’s what you need to know about Michael Brown‘s autopsy.

1. He Was Shot at Least 6 Times, Twice in the Head

The autopsy shows Brown was shot at least six times, with two of those bullets striking him in the head. Below, watch a press conference discussing the autopsy results.

2. All of the Bullet Wounds Are to the Front of the Body

All six bullet wounds struck the front of Brown’s body, perhaps indicating he was facing the officer when killed.

However, the evidence is inconclusive.

Four of the bullets struck Brown’s right arm and hand, and with the various positions the arm can assume, there are scenarios in which he could have been facing away.

It appears the shots were not fired at close range, based on the lack of gunshot residue on the victim’s body. However, the doctors performing the private autopsy did not have access to Brown’s clothing.

3. The Autopsy Was Conducted by Famed Forensic Pathologist Michael Baden

At the request of Michael Brown’s family, former New York City chief medical examiner and famed forensic pathologist Dr. Michael Baden traveled to Missouri and performed the private autopsy on Sunday. Local authorities had said the full official autopsy results could take weeks, and the family did not have faith that those results would be reliable.

Meanwhile, U.S. Attorney General Eric Holder has called for a federal autopsy, citing “extraordinary circumstances involved in this case,” so there will be a total of three autopsies.

Baden has reportedly performed more than 20,000 autopsies in his career, and he reviewed the autopsies of John F. Kennedy and Martin Luther King Jr.

Baden has testified as an expert witness in high-profile murder trials and gained further fame as host of HBO’s Autopsy. Watch him in that role below.

4. The Final, Fatal Shot Was a Bullet to the Top of the Head

Baden told the New York Times that one shot entered the top of Brown’s skull, indicating the teen’s neck was bent forward, and “it was likely the last of [the] bullets to hit him.” It was also likely the bullet that killed him. Baden, speaking at a press conference, said all of the other gunshot wounds were “survivable.”

Shawn Parcells, a forensic pathologist who assisted in the autopsy of Michael Brown, points to the spot a bullet hit the teenager during a press conference today in Ferguson, Missouri. (Getty)

According to a press conference held by the family, that bullet entered the top of Brown’s head and exited out the eye area, then passed through the jaw and again re-entered the body.

The family’s lawyers are using this information to support witness accounts that Brown was attempting to surrender. The path of the bullet suggests that Brown was either bending or falling when the fatal shot entered his brain.

5. A New Video Has Emerged of the Death Scene

Piaget told CNN’s Michaela Pereira in the interview above that she purposely waited to release the video until after the police officer who shot Brown had been officially identified. 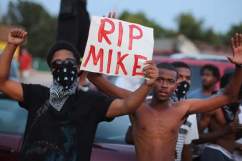