The Israeli military killed at least two senior Hamas commanders in a series of overnight air strikes on the Gaza Strip that the Israelis say they launched in response to rockets fired by Hamas.

The attacks came about after the Israelis claimed Hamas violated terms of a cease-fire that had led to relative calm in what had been a raging conflict.

Among those killed were Raed al Atar and Mohamed Abu Shamala, both of whom were accused of killing a Palestinian police officer in 1999.

The Israeli military confirmed on Twitter that it had “eliminated” al Atar and Shamala, both of whom are senior Hamas commanders.

The Israelis said al Atar played a major role in tunnel infiltrations, terror attacks that killed Israelis and the kidnapping of Gilad Shalit, an Israeli soldier who was kidnapped by Hamas in 2006 and held captive for five years until he was released as part of a 2011 prisoner exchange.

Israel said Shamala, the commander of Hamas forces in Southern Gaza, was directly involved in dozens of terrorist attacks, including the murder of Israeli soldiers.

2. 2 Other Hamas Leaders May Have Been Killed, Along With 1 Leader’s Wife & Infant Son

Palestinian emergency personnel dig through the rubble of a building destroyed following an Israeli military strike in Rafah in the south of the Gaza Strip. (Getty)

The Guardian reported that Hamas said Mohammed Barhoum, another commander, was also killed in the air strikes. The Israeli military did not confirm Barhoum’s death.

Mohammed Deif, Hamas’ top military figure, was also unaccounted for after a bomb struck a house in Gaza City, killing Deif’s wife and 8-month-old son, The Guardian reported. The paper reported that Israeli military analysts believe Deif was in the house at the time of the strike and that it was virtually impossible for anyone to have survived the attack.

3. The Israelis Say They Struck 20 Targets in Pre-Dawn Attacks

In response to Hamas rocket fire, we struck 20 targets in Gaza last night.

Prior to announcing the deaths of the Hamas commanders, the Israeli military said it had struck 20 targets in Gaza. The military later tweeted that Hamas had “made its decision” and the Israelis would make theirs.

Israeli cities are under rocket attack. Millions of Israelis are running to bomb shelters. Hamas made its decision. Now we will make ours.

Israeli Prime Minister Benjamin Netanyahu vowed Wednesday night that the Israelis would continue their attacks on Hamas until the safety of Israelis could be ensured. Watch the video above of Netanyahu’s statement.

“Only the guarantee of the calm and safety of Israeli citizens will bring an end to this operation,” he said. “And therefore, I will continue to operate with firmness and insistence. Operation Protective Edge is not finished, not for a minute. We are talking about a continued campaign.”

The United Nations Security Council expressed what it said was “grave concern” over the resumption of hostilities and called on both sides to halt attacks.

5. Al Atar Was Sentenced to Death in 1999 for Killing a Palestinian Police Captain

Al Atar and Shamala were both found guilty in 1999 of killing Rifat Joudah, a Palestinian police captain. Al Atar was sentenced to death by firing squad, while Shamala was sentenced to life in prison and a third militant, Osama Abu Taha, was given a 15-year jail sentence, according to a New York Times article.

Palestinian authorities declined to carry out the death sentence after widespread protests broke out over the sentencing and Yaser Arafat, then the President of the Palestinian Liberation Organization, met with civic leaders in Rafah. 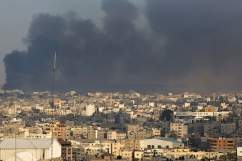 What Is the Third Intifada?