All the talk coming into Monday night’s game between the Cleveland Browns and Washington Redskins centered around the decision facing Browns coach Mike Pettine: Whether to name Brian Hoyer or Johnny Manziel the team’s starter — a move he intended to announce Tuesday.

After a 24-23 loss, though, neither player looked worthy of starting. In fact, the best quarterbacking of the night by far came on the game’s final play from scrimmage, when third-stringer Connor Shaw heaved a 45-yard touchdown pass as time expired to bring Cleveland within a point.

Shaw’s pass on the attempted 2-point conversion fell incomplete, leaving Washington with its second preseason win and the Browns with more questions than answers.

Manziel finished 7-for-16 passing for just 65 yards and a touchdown. His most memorable moment came when he flipped off the Redskins bench late in the third quarter, prompting Pettine to criticize him after the game for losing his poise.

Hoyer’s number were even worse, though they came in a smaller sample size: 2-for-6 passing for 16 yards and no touchdowns.

The lone saving grace was that neither QB threw an interception.

Hoyer started for the second straight game and played two series, neither of which included a first down.

On Cleveland’s first series, the Browns were facing 3rd-and-21 before a 19-yard run by Ben Tate brought about a 4th-and-2, forcing Pettine to summon Spencer Lanning to punt.

Hoyer had a chance to convert a 3rd-and-4 on the Browns’ second series, but his pass to Andre Hawkins was incomplete, prompting another punt.

Manziel entered the game with a terrific chance to improve upon the dismal performance by Hoyer. But his first series wasn’t any better.

After a 5-yard run by Tate and an incomplete pass, Manziel was sacked by Ryan Kerrigan on 3rd down, setting up yet another Cleveland punt.

The best play of the night by far came from Shaw, who nearly delivered a miraculous win in the final seconds.

With Cleveland trailing 24-17 in the final seconds, Shaw dropped back to pass and fired a Hail Mary just shy of the 50 yard-line. The ball was tipped, then caught in the endzone by Emmanuel Ogbuehi to bring Cleveland within 1.

Shaw had a chance to win it with a 2-point conversion, but his pass fell incomplete, ending the game the same way it started for the Browns: In disappointment. But his stat line was the best of Cleveland’s three QBs by far: 8-for-9 passing for 123 yards.

After a 26-yard Kal Forbaith field goal tied the game at 17 with 9:51 left in the game, Colt McCoy threw a frozen rope to Nick Williams for a 30-yard touchdown pass that gave Washington a 24-17 lead with 2:01 left in the game.

Jim Leonhard picked off a pass from Colt McCoy and took it 19 yards to the house with 12:19 left in the game, and Cundiff’s extra point briefly put the visitors on top 17-14.

It was hardly pretty, but Johnny Manziel threw his first career touchdown pass with 13:33 left in the third quarter.

Manziel dumped the ball off to Dion Lewis, who dove toward the endzone and barely got the ball across the plane before losing control of it.

The play capped a methodical 16-play, 68-yard drive and brought the Browns to within 14-10. It was the first Cleveland touchdown of the game and the first touchdown pass of Manziel’s career.

Kirk Cousins hit Ryan Grant for a 14-yard touchdown pass with 10:39 left in the third quarter, capping an 8-play, 60-yard drive and stretching Washington’s lead to 14-3.

It took more than 29 minutes, but when Evan Royster plowed into the endzone from 2 yards out, the game finally had its first touchdown.

Royster’s score capped a 9-play, 56-yard drive led by Cousins, and the Redskins took a 7-3 lead into the locker room.

PICKED OFF! @Gipson_duos24 gets the tip. 3rd #Redskins turnover in the 1st half of play. 1st down #Browns! #CLEvsWAS

Tashaun Gipson picked off a pass from Kirk Cousins and returned it 43 yards to the Washington 15, making it all but impossible for the reeling Cleveland offense not to score.

With Hoyer under center, Cleveland failed again to get a first down, but settled for a 29-yard Billy Cundiff field goal with 5:03 left in the first half for the game’s first points.

With the clock winding down in the first quarter, Griffin heaved a pass from his own 35-yard-line that Andre Roberts hauled in for a 49-yard gain to set up a 1st-and-goal.

Cleveland’s goal-line defense stuffed Washington on 1st, 2nd and 3rd downs, but Jay Gruden opted to go for it on 4th-and-goal from the 2. On 4th down, Alfred Morris tried to get the ball across the plane, and the officials ruled the play a touchdown on the field with 12:00 left in the first half.

After review, though, they ruled that Morris’ knee was down before the ball crossed the plane, taking the points off the board.

Robert Griffin III drove the Redskins deep into Cleveland territory on a drive that included four first downs. But the drive came to a halt when Joe Haden picked off RGIII with 5:36 left in the first quarter, making way for Manziel to enter the game.

Bend but don't break — huge INT from Joe Haden to kill the Redskins momentum. That's why he's a superstar — makes plays at the right time.

One of the most talked-about stories in the NFL preseason will come to a head tonight. Either Johnny Manziel or Brian Hoyer will win win the job as the Cleveland Browns’ starter in the team’s regular season opener against Pittsburgh.

First-year coach Mike Pettine plans to alternate reps between Hoyer and Manziel when the Browns take on the Washington Redskins. Pettine then plans to consult his assistants and announce the team’s Week 1 starter Tuesday.

Hoyer and Manziel were both solid but not spectacular in Cleveland’s 13-12 loss last week at Detroit. But Hoyer, a six-year pro out of Michigan State, is atop Cleveland’s depth chart heading into the game, so Manziel will have to out-play him Monday in order to win the job.

Robert Griffin III and the Redskins, meanwhile, are looking to make it two wins in a row after an impressive 23-6 win over New England in last week’s opener. 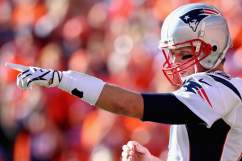 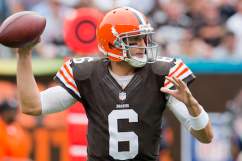 Loading more stories
wpDiscuz
0
0
Would love your thoughts, please comment.x
()
x
| Reply
Johnny Manziel and Brian Hoyer are fighting for the Browns' starting quarterback job tonight in Washington. We've got you covered with updates and highlights.