Adams is survived by his devoted wife Tracy.

1. He Was With His Family When he Died

Adams was on vacation with his family in Mexico when he suffered a heart attack. Adams’ last post on Instagram came on August 14. According to TMZ, Adams had no history of heart promblems.

We lost a true wild man with the passing of Jayboy. Jay Adams was a legend who will be missed.

Adams was portrayed by Emile Hirsch in the movie Lords of Dogtown.

3. After Years of Battling Addiction, Adams Was Finally Sober

He became sober in 2014 after battling drug-addiction for many years. 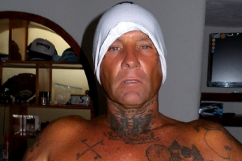 RIP Jay Adams: Photos of a Dogtown Legend You Need to See

4. He Had Been Banned From Leaving the County

Adams pictured at the Lords of Dogtown premiere in 2005. (Getty)

Adams was on vacation with his family when he died. He had been forbidden from leaving the country since his earlier drug convictions. A source told Heavy.com that he was now off of federal parole “and had permission to leave the country.”

In 2004, Adams was overheard on a federal wiretap introducing a meth dealer in California to a buyer in Hawaii. After doing time in prison for that offense, Adams said “My good-luck chances with judges are through. I can’t make those mistakes anymore.”

5. ‘The Original Seed’ Will Be Greatly Missed

Goodbye Jay Adams. Thank you for inspiring us to get vertical and to keep pushing the limits of what is possible. pic.twitter.com/ezBW7ZwdtI

During his skateboarding career, Adams went by the nickname “The Original Seed.”

RIP Jay Adams: Photos of a Dogtown Legend You Need to See