With the passing of Robin Williams, questions are now surfacing about what will be done regarding his 4 completed but yet unreleased movies. Find out what they are here.

Boulevard is a Robin Williams and Bob Odenkirk comedy that debuted at the Tribeca Film Festival earlier this year. It is slated for a wide release. According to Wikipedia, the synopsis of the film is:

Nolan Mack (Robin Williams) has worked at the same bank for almost 26 years in a life of monotony. He and his wife Joy (Kathy Baker) have embraced their marriage as a convenient distraction from facing reality. However one day, what starts as an aimless drive down an unfamiliar street turns into a life-altering decision for Nolan. When he meets a troubled young man named Leo (Roberto Aguire) on his drive home, Nolan finds himself breaking from the confines of his old life and coming to terms with who he really is.

No exact date was given for the film’s wide release, but it is expected to be in 2014.

Merry Friggin’ Christmas is set to be released on November 7. The film stars Robin Williams, Lauren Graham, and Joel McHale. The plot is:

Boyd Mitchler and his family must spend Christmas with his estranged family of misfits. Upon realizing that he left all his son’s gifts at home, he hits the road with his dad in an attempt to make the 8-hour round trip before sunrise.

3. Night at the Museum: Secret of the Tomb

When the magic powers of The Tablet of Ahkmenrah begin to die out, Larry Daley (Ben Stiller) spans the globe, uniting favorite and new characters while embarking on an epic quest to save the magic before it is gone forever.

This will be Robin Williams’ last movie to be released and Williams is featured as a voice actor.
It’s a British comedy about:

The film follows a disillusioned school teacher who suddenly finds he has the ability to do anything he wants, a challenge bestowed upon him by a group of power-crazed aliens watching him from space.

The movie is the only one without a definite release date, although it may be 2015. 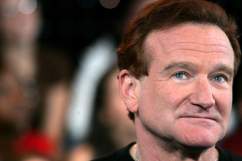 Read More
Movies, Robin Williams
Follow Heavy ↓
With the passing of Robin Williams, questions are now surfacing about what will be done regarding his 4 completed but yet unreleased movies. Find out what they are here.