Jimmy Graham caught two touchdown passes and Mark Ingraham added one, leading the Saints to a 31-17 win over the Tennessee Titans and improving New Orleans’ preseason record to 2-0.

Jimmy Graham dunk the ball over the crossbar to celebrate his first-quarter touchdown catch. (Getty)

With Luke McCown under center for the second straight start, New Orleans went on a 16-play, 80-yard opening drive that culminated with a 6-yard touchdown pass from McCown to Jimmy Graham with 8:30 left in the first quarter.

McCown and Graham hooked up again on a 19-yard strike with 4:25 left in the first half that put New Orleans ahead 14-10.

Jake Locker connected with Justin Hunter on a 4-yard touchdown strike with 5:02 left in the first quarter to even the score.

After Graham’s second touchdown put New Orleans up 14-10, Hunter struck again, this time on a 64-yard pass from backup Zach Mettenberger that put Tennessee on top 17-14 with 2:34 left in the half.

The lead, though, like Tennessee’s previous lead, was short-lived.

Ryan Griffin hit Mark Ingraham for a 23-yard touchdown on New Orleans’ ensuing possession that gave the hosts a 21-17 lead with 1:18 left in the half.

TOUCHDOWN! Griffin connects with Ingram for a 23-yd TD! #TENvsNO

The Saints put in the dagger when Griffin hit Seantavius Jones from 3 yards out with 8:49 left in the game, stretching the lead to 31-17. 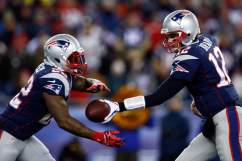