Prominent Baton Rouge TV personality Scott Rogers was having an affair with his son-in-law Matthew Hodgkinson, according to Iberville Sheriff Brett Stasi. On August 27, Hodgkinson went to his lover’s home and shot him dead with a single bullet to the head. Hodgkinson then turned the gun on himself, he attempted suicide but survived.

1. Prior to Shooting Rogers, Hodgkinson Had Just Been to the Grand Jury

Hodgkinson and his wife had just testified to the grand jury on August 27 about Rogers’ behavior. Earlier in 2014, two children were removed from Rogers’ care by the state. On August 25, Rogers’ show, The Around Town Show was canceled. WAFB reports that the two children were a 10-year-old boy and a 2-year-old male with special needs.

2. Hodgkinson’s Marriage to Rogers’ Daughter Was a Sham

Rogers and Hodgkinson had known each other since the both lived in England together. WBZ reported that Hodgkinson’s marriage to Rogers’ daughter was one of convenience so that the English-born murderer could live in the U.S.

3. Hodgkinson Was a Student of Rogers’

4. Hodgkinson Had Just Canceled ‘Around Town’

According to NOLA, Hodgkinson worked as a producer on The Around Town Show. The website reports that it had been his decision to cancel the show due what he called a “family catastrophe.”

5. Rogers Attempted Suicide Before the Shooting

A week prior to the shooting, police responded to Rogers’ home after reports that he had attempted suicide by taking a large amount of pills, reports WAFB. 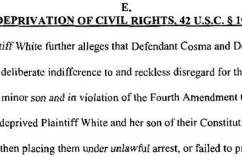