Stacy Lewis is the top name these days in the LPGA and will be fighting for her third major championship at the 2014 Wegmans LPGA Championship as the no. 1 ranked player in the world.

Lewis has won two majors, 11 LPGA tournaments and 13 total professional tournaments. With career earnings at over $8 million, she sky rocketed to the top of the field since joing the LPGA in 2008.

Although she was born in Toledo, Ohio she was born and raised in the woodlands north of Houston, Texas where she began golfing all year round. She attended The Woodlands High School and graduated in 2003, going on to play golf at the University of Arkansas till she went pro in 2008.

3. She Was a Part of the National Charity League Starting in High School

In an interview with Golf Digest, Lewis opened up about more intimate details of her life including her random quirks and pastimes. She explained that she has grown as a person and carried her generosity with her as she made more and more money with her success on the course. Her, her mother and her sister used to volunteer in nursing homes and do activities with less fortunate children in the community.

In the Golf Digest interview she says:

When you do things for others, the feeling stays with you. It becomes a habit. When I started having success as a pro and had some money, I felt I had to do something. I’ve given $100,000 to Arkansas, my alma mater. When I won the LPGA Founders Cup in March [to become No. 1 in the world], I donated $50,000 to junior golf. I’ve gone to Africa on a humanitarian mission. I’m not bragging this stuff up. I’m saying, try it. It’ll do as much for you as the people you’re helping.

4. She Was Diagnosed With Scoliosis When She Was 11

Not only is Lewis the best woman golfer in the world because of her scores, but her mentality in the game. At the age of 11, Lewis was diagnosed with severe scoliosis that changed her life and ability to play golf for almost 7 years.

She embodies those values that we most cherish: fiercely competitive yet considerate, tremendously talented yet seeks betterment through hard work, intelligent without being condescending, confident without being self absorbed and incredibly irrepressible no matter what obstacles are before her. In many respects, Stacy Lewis is who we would like to be as an American people.

Stacy Lewis is the best story in women’s golf because of the things that she’s had to overcome in order to just play golf again. 6 1/2 years in a back brace and back surgery, after which she wasn’t sure she would even be able to walk, let alone swing a golf club again.

At 28 years old, Lewis is worth $2.5 million after wins and endorsements from Mizuno. She has won a total of 8 LPGA tournaments and 9 total professional tournaments. 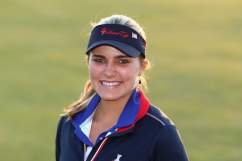 Read More
5 Fast Facts, Golf, LPGA, Sports
Follow News ↓
Stacy Lewis is the current no. 1 player in the world and will be fighting for her third major championship at the 2014 LPGA Championship.