The Titans fans who braved the rain Saturday ended up watching a come-from-behind win. (Getty)

The Green Bay Packers scored early in Saturday night’s preseason opener against the Tennessee Titans, but it was two late touchdowns by the Titans that made the difference.

Bishop Sankey and Jackie Battle both scored second-half touchdowns, leading Tennessee to a 20-16 win on a rainy night in Nashville.

James Starks Put Green Bay on the Board 4:26 In

Starks carried the ball on six of Green Bay’s eight plays, with a 5-yard scramble by Flynn and a 10-yard completion to Richard Rodgers accounting for the others.

Shonn Greene’s 13-yard rushing touchdown put the Titans on the board with 4:22 left in the first quarter, but for the second time in as many nights, an NFL kicker couldn’t handle the league’s next experiment with 33-yard extra points.

Maikon Bonani missed the PAT, leaving the Pack ahead 7-6.

After scoring on its first drive, the Packers went scoreless until rookie running back Rajion Neal scored on a 12-yard rushing touchdown with 8:07 left in the third quarter to make it 13-7.

Green Bay tried to make it a three-posession game by going for two, but Scott Tolzien’s pass was incomplete.

Titans rookie running back Bishop Sankey scored on a 5-yard pass from Charlie Whitehurst with 2:32 left in the third quarter for his first career touchdown, tying the game at 13. 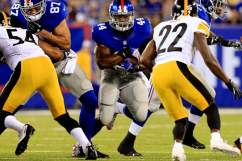 Read More
Football, NFL
Follow News ↓
The Green Bay Packers scored early in Saturday night's preseason opener against the Tennessee Titans, but it was two late touchdowns by the Titans that made the difference.