Tommy Lee Travis Engle was arrested in Kentucky, two days after kidnapping his own son from his mother’s house on August 4. An amber alert was issued for 3-year-old Tommy Lee Able Engle with speculation that his father may go to the west coast or Canada. It was reported that Tommy Engle had connections in many different places thanks to his military service. On August 6, Engle was arrested in Pikeville, Kentucky, his son was also found safe.

1. Engle Recently Asked a Friend For ‘Some New Paper Work’

On August 2, he told a friend on his Facebook page that “might need some new paper work.” This was during a post where Engle explained that had to get away from the east coast. According to WTVR, cops think that Engle is headed to Canada. Jessicca Justice, a woman referred to as his fiancee on Facebook posted this on her page on August 5:

On August 4, Justice wrote on her page, that Engle had dropped his son off at his mother’s house in Kentucky on August 3. She then writes “[Engle’s mother and stepfather] were given direct orders not to let Tommy have [Tommy Lee Able Engle] back.” Justice writes that when Engle went to get his son, his mother gave her son the child without protest.

Tommy Lee Able was thought to be in extreme danger. Police believed that Engle was armed with an AK-47 and was wearing ballistics vest. Police say that he made homicidal threats against law-enforcement. Tommy Lee Able Engle had last been seen at 367 Oaks Hill Lane in Critz, Virginia at 6:30 p.m. on August 4. WTVR reports that Engle had texted police pictures of his son.

3. Engle Is a Former Marine

According to his Facebook page, Engle is a former-Marine and is from Pikeville, Kentucky. He also writes on his page that he is engaged to a Jessica Justice. His friends have speculated on Facebook that he may be suffering from PTSD. 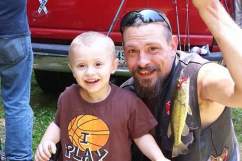 Tommy Lee Engle Pictures: The Photos You Need to See

On his social media page, Engle posted numerous pro-gun and pro-Israel statements. In June, he posted a link in support of imprisoned Sgt. Andrew Tahmooressi. Engle also appears to be a motorcycle enthusiast and refers to himself as a founding member of motorcycle club the Bastard Few.

5. The Public Were Warned Not to Approach Engle

Anybody with any information on the abduction of Tommy Lee Travis Engle is asked to call either the Virginia State Police at 1-800-822-4453 or the Patrick County Sheriff’s Office at 276-694-3161. The two were thought to be traveling in a navy blue Dodge Neon with Virginia plates reading “WNZ9169.”

Tommy Lee Engle Pictures: The Photos You Need to See