This one was over just about as soon as it started.

The United States basketball team opened up a big lead Saturday afternoon against Finland and ran away with its FIBA World Cup opener in a 114-55 rout. Click here for the full box score.

When Davis wasn’t scoring in the low post and keeping Finland out of the paint on defense, he was running the floor and scoring on plays like this: A put-back dunk off a James Harden missed layup in the third quarter. He finished with 17 points — one shy of Klay Thompson for the team lead — on 6-for-8 shooting.

Thompson scored 18 points off the bench on 4-for-7 3-point shooting and Derrick Rose (12 points) and Rudy Gay (10) joined Davis and Thompson in double figures.

One of the highlights was this alley-oop from James Harden to Gay:

Petteri Koponen and Shawn Huff scored 12 points apiece for the Finns, who were playing their first ever World Cup game. 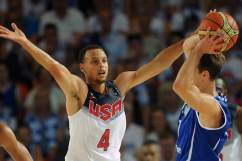 All 12 Americans played and all but three (Derrick Rose, Steph Curry and DeMar DeRozen) shot better than 50 percent from the floor.

Steph Curry, usually one of the sharpest shooters in the NBA and the best outside shooter on the USA roster, had an uncharacteristically lousy shooting game.

Anthony Davis — the team’s leading scorer in its exhibition rout of Slovenia — scored 11 points in the first half, and the Americans turned in as dominant a defensive performance as you’ll ever see in the second quarter, holding the Finns to 2 points as they built a 60-18 halftime lead.

The Americans led 31-16 at the end of the first quarter and outscored the Finns 29-2 in the second.

After cruising through a four-game exhibition schedule unbeaten, the United States basketball team begins play in the FIBA World Cup Saturday when it takes on Finland in the first game of group play.

It’s the first ever World Cup game for the Finns and the first game of any kind between the two teams since the United States’ 77-51 win in the 1964 Olymoics in Tokyo.

Finland, led by guard Petteri Koponen, is ranked 39th in the world. The Finns went 5-3 in FIBA Europe play last year and finished tied for ninth.

The game is the first of five the Americans will play in group play, which features a round-robin in each group. The U.S. and Finland are in Group C, which also includes the Dominican Republic, New Zealand, Turkey and Ukraine.

The U.S. plays Turkey on Sunday and has a day off Monday before playing New Zealand on Tuesday. You can see the team’s full schedule here.

WHO: United States vs. Finland

LIVE STREAM: If you have a cable subscription that includes ESPN, you stream the game online for free at WatchESPN.com or on the WatchESPN mobile app. 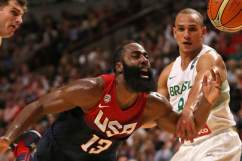