The bad news for the United States men’s basketball team was that the Red White and Blue faced a deficit Wednesday night against the Dominican Republic.

The good news is that the deficit was extremely short-lived and the U.S. took the Dominicans to the woodshed from the middle of the first quarter on.

The U.S. went on a 14-0 first-quarter run to open up a lead and never looked back, throttling the D.R. 105-62 at Madison Square Garden in their second tuneup for the World Cup of basketball, which begins next week in Spain. (Watch a full highlight feel from the game in the video above and check out the box score here.)

The U.S. is in action again Friday night against Puerto Rico. Check out a preview of the game here: 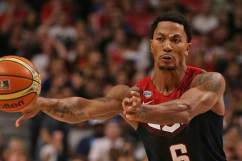 Here’s how the win over the DR went down:

Kyrie Irving, who started in place of Derrick Rose, played only 16 minutes but had a virtually perfect stat line: 12 points on 5-for-5 shooting with 5 assists and no turnovers.

Kyrie Irving is a cheat code. His handles are amazing.

Kyrie Irving showing why he's gonna be the best player on the Cavaliers next year.

Couple of dominant minutes in the third quarter for Kyrie Irving, making the most of the extra time with Rose sitting out.

Rose, who sat out with knee soreness, is expected to practice with the team as it prepares to play Puerto Rico in another exhibition game Friday. The Americans open the World Cup August 30 against Finland.

Rudy Gay and DeMar DeRozan had 13 points apiece off the bench for the U.S., and DeRozen added 6 assists and 5 rebounds. (Watch the video above for a DeRozan-centric highlight reel.)

James Harden and Andre Drummond had 12 points apiece and Klay Thompson added 11 off the bench.

Francisco Garcia and James Feldeine had 14 points apiece for the Dominicans, who had 16 turnovers and just 5 assists.

Karl Towns, an incoming freshman at Kentucky who played his senior year in high school at St. Joseph of Metuchen in New Jersey, checked in for the Dominicans.

Towns played for the Wildcats against the Dominican team during an exhibition game last week and put on a show during the tour, as NJ.com’s Jeremy Schneider wrote last week.

Here’s a look at Towns schooling his DR teammates with a no-look pass while playing for UK:

A great defensive effort and strong starts for @JHarden13 and @AntDavis23 give the #USABMNT a 28-17 lead after 1qtr. pic.twitter.com/nuu3vgAx16

The United States trailed by a bucket in the opening minutes, but jumped ahead quickly with a 14-0 run that turned a 6-4 deficit into an 18-6 lead.

James Harden, who earned widespread ridicule earlier this week for saying he was the best player alive, recovered nicely from an airball, scoring 7 straight points during the run.

Francisco Garcia, Harden’s Houston Rockets teammate, scored 9 points in the quarter to keep the Dominicans in it.

Francisco Garcia knocks down the three, then looks at the USA bench and says something to his NBA teammate James Harden!

We have tipoff at #MSG! #USABMNT TUNE IN NOW to NBATV to watch the game LIVE! pic.twitter.com/eR3yCDRqJq

Starting Lineups: Irving in, Rose Out

Derrick Rose, who’s nursing a sore knee and was a game-time decision, will not play. Kyrie Irving is starting in his place along with Steph Curry and James Harden in the backcourt.

Here are the lineups:

Loading more stories
wpDiscuz
0
0
Would love your thoughts, please comment.x
()
x
| Reply
Kyrie Irving replaced Derrick Rose in the starting lineup and put on a show at Madison Square Garden, leading Team USA to a rout of the Dominican Republic.