Having just cut its roster from 16 players down to 12, the United States basketball team is set to play its final FIBA World Cup tuneup Tuesday against Slovenia.

Team USA, which cruised past Brazil, the Dominican Republic and Puerto Rico in a slate of exhibition games in the U.S., has traveled to Gran Canaria, where coach Mike Krzyzewski led two days of workouts.

Team USA struggled through the first half against Puerto Rico, but used a dominant third quarter to pull away in a 112-86 win. The Americans have won 53 straight in international competition and have an average margin of victory of 28.7 points in their three games this year.

Krzyzewski said at Monday’s media availability that he’s looking forward to heading into the game with the team’s roster settled:

What we try to do is have a good core of eight or nine guys, and then the last three kind of fit in with what you need and how you complement the other players on the team. We feel good about the twelve. We’ve had a lot of different things go on with our team with injury and with some guys not being able to play, so we feel good about finally getting to the stability of having the twelve guys. 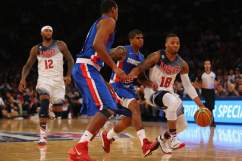 The Slovenians, making their third World Cup appearance, aren’t expected to do a lot of damage, but they’re not pushovers, either. Slovenia is ranked 13th in the world and has a respectable 7-8 all-time record in the World Cup.

Check out this Fansided post for a look at Goran Dragic’s preparation for the game.

The game is Team USA’s lasts tuneup before taking on Finland in the World Cup opener on Friday.

WHO: USA vs. Slovenia 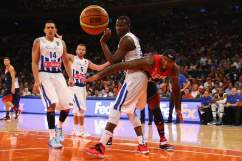 USA vs. Puerto Rico Photos: The Pictures You Need to See